This gives you a pretty good idea of the magnitude of euro selling by central banks. The question is when are they finished, and perhaps, when foreign exporters again pressure their cb’s to increase holdings to target the euro zone for exports, which is the reason the cb’s originally bought the euro.

And note that the current account surpluses indicate the EU may be through the ‘j curve’ as net exports continue to move higher with the foreign cb induced currency depreciation.

Of course QE and negative rates continue to work to strengthen the euro, as the does the current account surplus, so it’s just a matter of time before the fundamentals overtake CB selling. The problem is timing… ;)

April 10 (Bloomberg) — Quantitative easing may be helping Europe achieve its economic targets, but it’s also undermining the long-term viability of the euro by tarnishing its allure as a global reserve currency.

Central banks cut their euro holdings by the most on record last year in anticipation of losses tied to unprecedented stimulus. The euro now accounts for just 22 percent of worldwide reserves, down from 28 percent before the region’s debt crisis five years ago, while dollar and yen holdings have both climbed, the latest data from the International Monetary Fund show.

“As a reserve currency, the euro is falling apart,” said Daniel Fermon, a strategist at Societe Generale SA in Paris. “As long as you have full quantitative easing, there’s no need to invest. The problem for the moment is we don’t see a floor for the currency. Money’s flowing out.”

European Central Bank President Mario Draghi has in the past welcomed the drop-off in reserve managers’ holdings because a weaker exchange rate makes the continent more competitive. Yet firms including Mizuho Bank Ltd. warn the currency’s waning popularity reflects a more lasting loss of confidence in an economy that shrank in two of the past three years.

The decline in euro reserves suggests other central banks consider the ECB’s 1.1 trillion euros ($1.2 trillion) of QE bond purchases, which started a month ago, to be the biggest threat to the currency’s global status since its 1999 debut.

Greece’s debt woes aren’t helping, either. The ECB ramped up the emergency funding available to Greek banks Thursday to alleviate the country’s worsening liquidity issues amid drawn-out negotiations over its bailout.

“Most of the fall in the euro share represented outright selling of euros” rather than simply reflecting declines in the exchange rate, said Ray Attrill, the bank’s global co-head of currency strategy in Sydney.

Of the $6.1 trillion of reserves for which central banks specify a currency, the proportion of euros fell in every quarter of 2014, IMF data show. Last year was also the first time euro holdings fell in cash terms.

Yen holdings increased in three of the four quarters and make up 4 percent of the total, up from as low as 2.8 percent in early 2009. Dollars account for the biggest proportion at 63 percent after reserve managers increased their holdings in the final six months of last year. That’s down from as much as 73 percent in 2001.

The changes came as the yen and euro each sank 12 percent versus the greenback last year. The euro has tumbled about the same amount since then, which should further shrink its presence in central banks’ war chests.

The euro’s also falling against its broader peers, dropping more than 7 percent this year among a basket of its Group of 10 nations tracked by Bloomberg Correlation-Weighted Indexes, the biggest decline in the group. The dollar climbed almost 7 percent on the prospect of higher U.S. interest rates, beating a gain of about 6 percent in the yen. 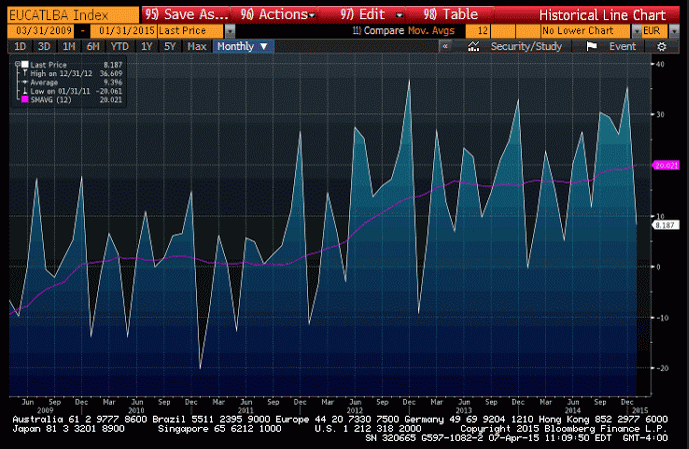 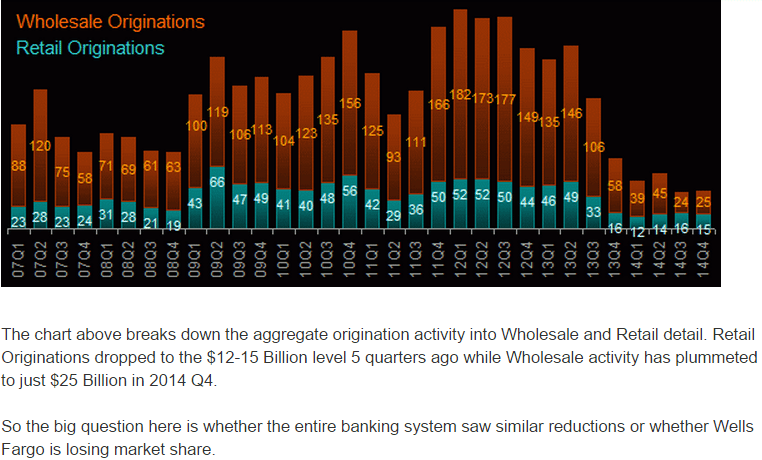 The March report of the Credit Managers’ Index (CMI) from the National Association of Credit Management (NACM) fell further this month indicating that some serious financial stress is manifesting in the data.

“We now know that the readings of last month were not a fluke or some temporary aberration that could be marked off as something related to the weather,” said NACM Economist Chris Kuehl. “These readings are as low as they have been since the recession started and to see everything start to get back on track would take a substantial reversal at this stage.”

The combined score of 51.2 is moving dangerously close to contraction zone. The index of favorable factors dropped to 55.4 while the unfavorable factors drastically fell to 48.5–a place this index has not seen since after the end of the recession. “The signal this sends is that many companies are not nearly as healthy as it has been assumed and that there is considerably less resilience in the business sector than assumed,” said Kuehl.

Most categories showed decreases this month, but the real damage occurred in the unfavorable changes categories. According to Kuehl, the most disturbing drop happened in the rejection of credit applications category, which fell from 48.1 to an even weaker 42.9. The accounts placed for collection fell to 49.8, disputes improved slightly to 49, dollar amount beyond terms fell to 45.5, and dollar amount of customer deductions dropped to 48.7.

(Econintersect) — Week 13 of 2015 shows same week total rail traffic (from same week one year ago) again declined according to the Association of American Railroads (AAR) traffic data. Intermodal traffic, which accounts for half of movements, is growing year-over-year – but weekly railcar counts remain in contraction. Rail traffic remains surprisingly weak.

Baltic Dry Index is Now Below the Great Recession Low

April 11 (Econintersect) — The Baltic Dry Index is considered a coincident and leading indicator for global economic growth. It tracks the cost of shipping bulk commodities around the world. The BDI is now below the level reached during the Great Recession.