US 1Q GDP has been revised lower by far than expected. After having initially been reported as a 0.1% rise, then a 1% contraction, the third release shows that GDP growth is now reported as -2.9 QoQ% annualised, which leaves annual growth at just 1.5%YoY. 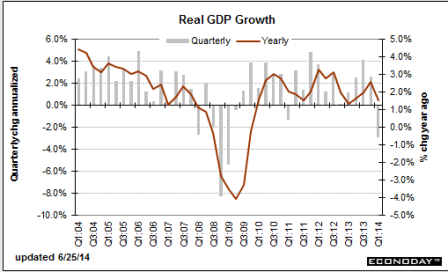 The consensus expectation was for a -1.8% reading. The damage was largely done through the private consumption component, which is now reported as rising just 1% versus 3.1% previously.

Also ‘smoothing’ from numbers that looked high to me in H2 and an adjustment to ACA related healthcare expenses previously booked as PCE: 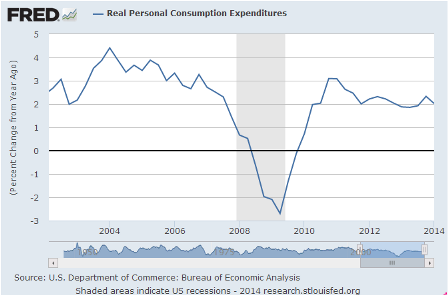 Maybe after a Q4 surge due to expiring tax credits? 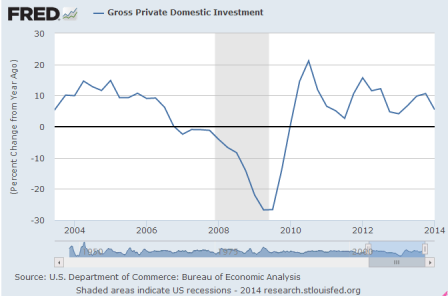 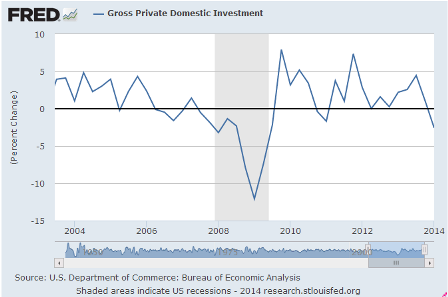 while government consumption was left at -0.8%. However, exports were revised down and imports revised up meaning that the contribution from net trade is to subtract 1.5% from GDP growth rather than 0.95% as previously announced.

Reversing a similar, prior blip up, as previously discussed: 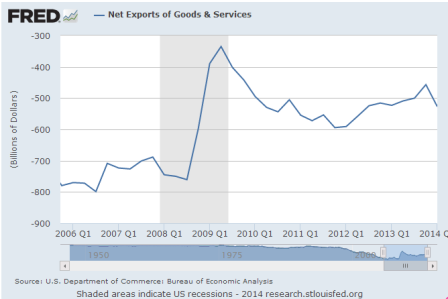 Nonetheless, reaction should be fairly muted given widespread expectations of a sharp bounceback in 2Q14 and the fact that the weather had such a damaging impact on 1Q activity. Indeed, we suspect that we could see GDP rise by more than 5% annualised in 2Q.

High frequency numbers for the quarter have looked good while inventories should also make a significantly positive contribution after having been run down sharply.

After having been run up in H2. We’ll see where they go from here.

And, as previously discussed after the jump up in Q3, inventory accumulation seldom leads a boom:

According to the MBA, the unadjusted purchase index is down about 18% from a year ago. 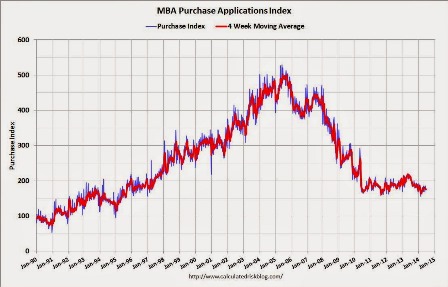 And May durables not so good either:

Transportation fell 3.0 percent after a 1.7 percent rise in April. The latest dip was from weakness in nondefense aircraft. Motor vehicles and defense aircraft orders rose.

Outside of transportation, gains were seen in primary metals, fabricated metals, and “other.” Declines were posted for machinery, computers & electronics, and electrical equipment.

On a positive note, there was improvement in equipment investment. Nondefense capital goods orders excluding aircraft rebounded 0.7 percent in May after decreasing 1.1 percent the month before. Shipments of this series rebounded 0.4 percent after a 0.4 percent dip in April.

The good news is this series is muddling along ok: 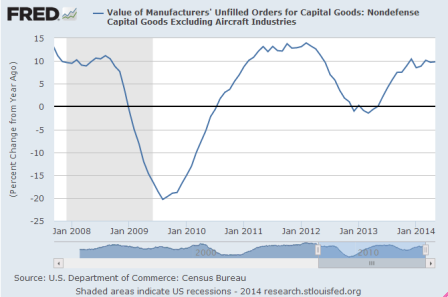 The latest durables report is in contrast to recently positive regional manufacturing surveys and also the sharp jump in manufacturing production worker hours of 0.8 percent for May. But durables data are very volatile and we likely need a couple of more months of data before taking a negative tone on this sector.

The next leg to fall may be employment, as the 1.2 million people who lost long term benefits at year end may have been taking menial jobs at the rate of maybe 75,000/month or more for 6 months or so, which may have front loaded the monthly jobs numbers. If so, monthly job gains may fall into the 100,000 range soon.

So in general it was down for the winter, back up some, and we’ll see what happens next.

The ‘survey’ numbers and professional forecasts look promising, however it still looks to me like we are under the macro constraint of a too low govt deficit that’s struggling to keep up with the unspent income/demand leakages, with scant evidence of help from growth in private credit expansion.

And I tend to agree with Fed Chair Yellen here, which would tend to keep rates lower/longer if she gets her way. However I don’t agree that low rates somehow support aggregate demand, so I don’t see the likelihood of any call from the Fed or other forecasters for the fiscal relaxation I’ve been proposing.

Yellen may be poised to rewrite Fed’s rule book on wages, inflation

June 25 (Reuters) — “My own expectation is that, as the labor market begins to tighten, we will see wage growth pick up some to the point where … nominal wages are rising more rapidly than inflation, so households are getting a real increase in their take home pay,” Federal Reserve Chair Janet Yellen said last week, adding: “If we were to fail to see that, frankly, I would worry about downside risk to consumer spending.” Over the last year Fed staff changed their main model for forecasting wage and price inflation to reflect evidence that companies were adjusting prices more slowly than in prior years.

My immediate proposals remain 1) A full FICA suspension, which raises take home pay by 7.6%, and, for businesses that are competitive, lowers prices as well, restoring sales/output/employment in short order 2) A $10/hr federally funded transition job for anyone willing and able to work to promote the transition from unemployment to private sector employment 3) A permanent 0 rate policy with Tsy issuance limited to 3 mo bills. 4) Unrestricted campaign contributions, however, say, 40% of any contribution goes to the opposition…