Saudi discounts for February. Some reduced, some increased, so probably more same- prices fall until Saudi output hits its capacity:

Zig zagging a lot recently, now back down to where they’ve been for a while:

Highlights
Mortgage application activity fell sharply in the two weeks ended January 1, down 15 percent for home purchases and down 37 percent for refinancing. Rates were steady in the period with the average 30-year mortgage for conforming balances ($417,000 or less) up 1 basis point to 4.20 percent. Weekly data can be volatile during the shortened holiday weeks, making the latest results difficult to read. This series will resume its weekly periods beginning next week.

This is a forecast for Friday’s jobs report:

Highlights
ADP is calling for unusual strength in Friday’s employment report, at 257,000 for private payrolls which is far outside Econoday’s consensus at 190,000 and well outside the high estimate for 227,000. Strength of this degree would underscore the health of the labor market and would begin to seal expectations for a rate hike at the March FOMC. ADP isn’t always an accurate barometer for the employment report but today’s results could definitely affect the markets.

A bit smaller than expected, but again, both imports and exports are falling:

Highlights
The nation’s trade balance, reflecting weak cross-border activity, narrowed in November to $42.4 billion from a revised $44.6 billion in October. Exports fell 0.9 percent in the month to $182.2 billion with industrial supplies and consumer goods showing the most weakness. Imports fell 1.7 percent to $224.6 billion with both consumer goods and capital goods showing declines.

Despite low oil prices, the petroleum gap widened by $0.9 billion to $5.4 billion due to rising demand. The price of imported oil fell 88 cents to $39.24 for the lowest level since February 2009.

The nation’s fourth-quarter trade balance adjusted for inflation is still trending slightly above the third-quarter which will pull down GDP. But the takeaway from today’s report is slowing global trade. 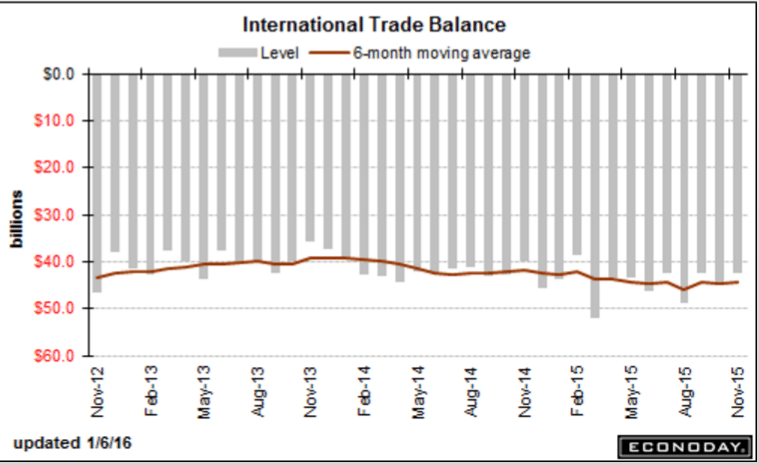 Highlights
Flat is a good description of the nation’s factory sector as factory orders slipped 0.2 percent in November, making October’s revised 1.3 percent gain look like a rare outlier. Durable goods orders were unchanged in the month while orders for non-durable goods fell 0.4 percent on price weakness for petroleum and coal.

Capital goods data, unfortunately, are mostly weak including a 0.3 percent decline for core orders. Shipments of core capital goods fell 0.6 percent in November and follow October’s 1.0 percent decline in readings that will pull down the business investment component of the fourth-quarter GDP report.

Outside of orders, total shipments edged 0.2 percent higher to end a string of declines that go all the way back to July. Inventories also offer good news, falling 0.3 percent and bringing down the inventory-to-shipment ratio to a less heavy 1.35 vs October’s 1.36. Unfilled orders are another positive, rising 0.2 percent following a 0.3 percent gain in October.

The factory sector is not exactly robust, the result of weak demand for U.S. exports and also weakness in the domestic energy sector reflected in this report by a 13.6 percent monthly plunge in orders for mining & oil field machinery. But the nation’s economy is not narrowly focused on the factory sector, evidenced by healthy readings in today’s ISM non-manufacturing report. 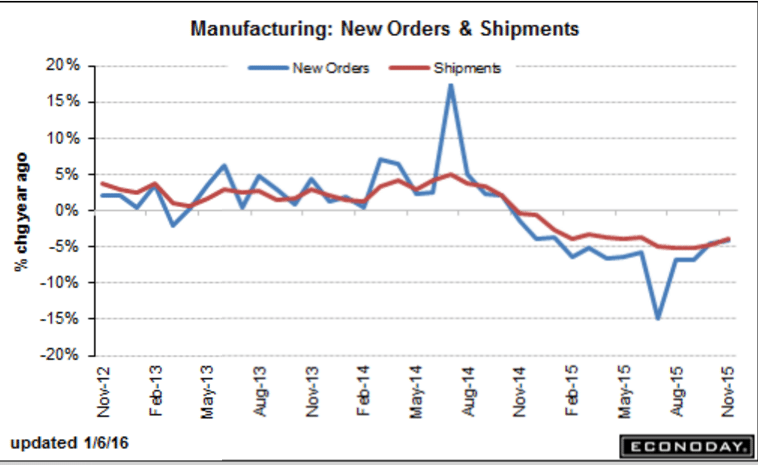 Yes, it’s above 50, but the chart indicates the non manufacturing growth rate is melting away: 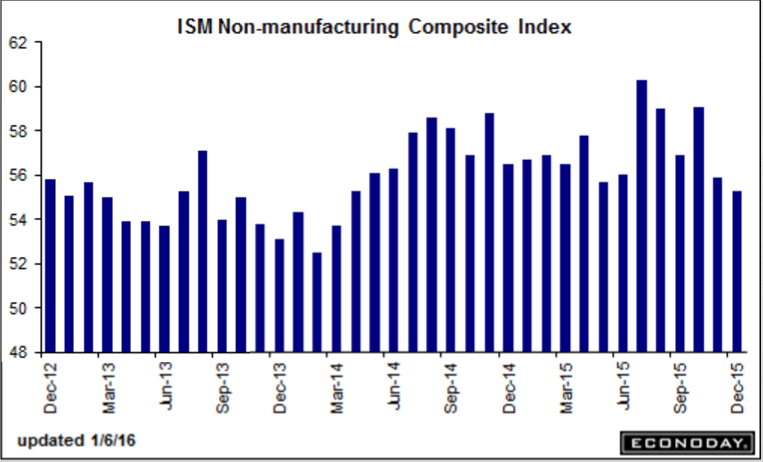