ECB will do what is needed to keep inflation target on track: Draghi

Oct 31 (Reuters) — “If we are convinced that our medium-term inflation target is at risk, we will take the necessary actions,” ECB president Draghi told Il Sole 24 Ore. “We will see whether a further stimulus is necessary. This is an open question,” he said, adding it would take longer than was foreseen in March to return to price stability. Draghi said inflation in the euro zone was expected to remain close to zero, if not negative, at least until the beginning of next year. “From mid-2016 to the end of 2017, also due to the delayed effect of the depreciation in the exchange rate, we expect inflation to increase gradually,” he said. 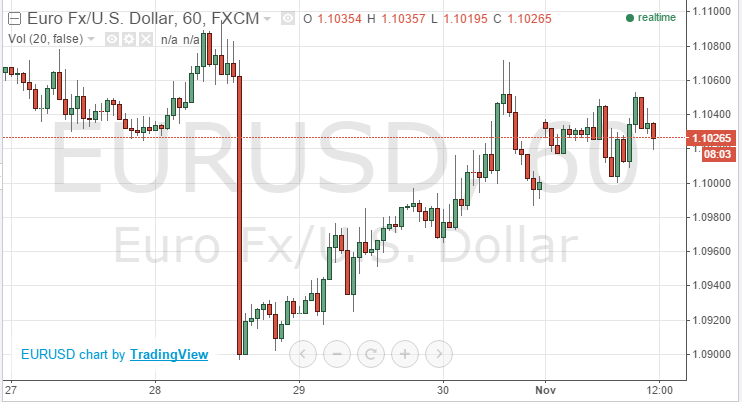 Operating conditions deteriorate at a slower pace in October

Nov 2 (Markit) — The China PMI posted 48.3 in October, up from 47.2 in September. Total new business placed at Chinese goods producers declined for the fourth month in a row in October. That said, the rate contraction eased since September’s recent record and was only modest. Softer domestic demand appeared to be a key factor weighing on overall new work as new export business increased for the first time since June, albeit marginally. Nonetheless, a further decline in overall new orders led firms to cut their production schedules again in October.

Weakest deterioration in business conditions since May

Nov 2 (Markit) — The headline Taiwan Manufacturing PMI rose from 46.9 in September to 47.8 in October. Production at manufacturing companies in Taiwan continued to decline in October, as has been the case in each month since April. However, the rate of contraction eased further from August’s 35- month record to the slowest since May. Companies that cut output generally attributed this to poor economic conditions and fewer new orders. The latter was highlighted by a further fall in total new work in October. As was the case with output, however, the rate of reduction was the weakest seen in five months.

Nov 2 (Markit) — The South Korean manufacturing PMI posted at 49.1, down slightly from 49.2 in September. Production at South Korean manufacturers declined for the eighth successive month in October. According to anecdotal evidence, global economic uncertainty and poor demand conditions contributed to the latest fall in output. Supporting the fall in output was a decline in total new orders during the month. A number of panellists mentioned unstable economic conditions and a decline in sales from both domestic and international clients as factors behind the latest contraction.

Oct 31 (Reuters) — The trade ministry attributed the declines mainly to a sharp fall in ship contracts and low oil prices. Exports fell 15.8 percent on-year to $43.5 billion in October, their 10th straight month of declines and the sharpest fall since August 2009. Imports slumped 16.6 percent to $36.8 billion. The trade surplus fell to $6.7 billion in October from a revised $8.9 billion in September. The slump in exports was partially expected by economists as South Korea posted a record high in shipments last year.

Nov 2 (Markit) — Posting a 22-month low of 50.7 in October (September: 51.2), the seasonally adjusted Nikkei India Manufacturing PMI waned. Output growth eased in October on the back of a slower increase in new orders. Rates of expansion in both production and order books were the weakest in their current 24-month sequences of growth, with panellists reporting challenging economic conditions and a reluctance among clients to commit to new projects. New business from abroad placed with Indian manufacturers rose for the twenty-fifth straight month in October.