Highlights
There’s no bounce at all in the Empire State manufacturing survey where the headline index sank to minus 1.98 in June, well below Econoday’s low-end forecast for 4.00 and the second negative reading in three months that pulls its second quarter average into the negative column at minus 0.03. This report was actually doing much better during the heavy weather and special factors of the first quarter when it averaged 8.21.

And new orders point to greater weakness ahead, at minus 2.12 in June for the third negative reading in four months. Shipments have been strong in this report, at 12.01 in June, but won’t stay strong very long given the weakness in orders. The six-month outlook reflects this concern, down nearly 4 points to 25.84 which is the lowest for this reading since February and the second lowest in 2-1/2 years.

Unfilled orders are always weak in this report, at minus 4.81 in today’s report which is actually the least negative reading since October last year. And employment does remain in the plus column at 8.65, up from 5.21 in May but well down from their recent peak in March at 18.56. Price readings show little change with output prices showing fractional upward pressure at 0.96 and input prices showing steady and mild pressure at 9.62 vs 9.38 in May which was the lowest reading in nearly 3 years.

The manufacturing sector is supposed to be building up steam, not losing steam. There are no special factors in the second quarter that can be blamed for the loss of momentum. Later this morning the industrial production report will offer definitive indications on national shipments during May. On Thursday, the Philly Fed, which has also been weak, will offer a second early look at conditions in June. 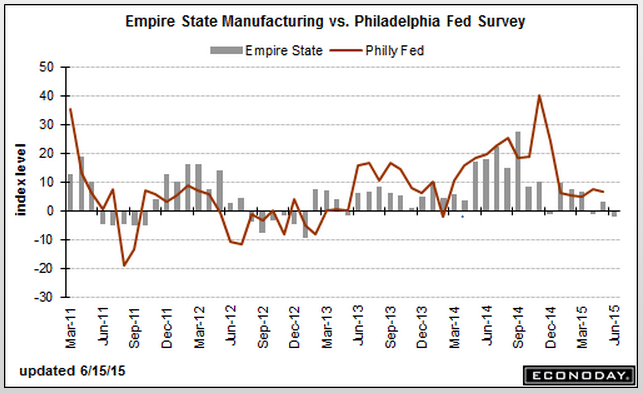 And another bit of bad news here:

Highlights
The hawks may have some good arguments at this week’s FOMC meeting but they won’t have anything convincing to say on the manufacturing sector which, instead of rebounding from a weak first quarter, appears to be slowing further. All the main numbers in today’s industrial production report are below low-end forecasts with the headline at minus 0.2 in May and April revised 2 tenths lower to minus 0.5. May is the fourth negative reading in the last six months with the other readings at no change. Capacity utilization fell 2 tenths to 78.1 percent which is the lowest rate since January 2014.

The manufacturing component fell 0.2 percent in May for the third negative reading in five months. Weakness in May was concentrated in consumer goods and construction supplies, the latter a disappointing indication for the housing sector. The mining component, at minus 0.3 percent, has really been hit hard by weakness in the energy sector but, in a plus, contraction here seems to be easing. The utilities component is positive but just barely at plus 0.2 percent.

Turning back to manufacturing, vehicles are actually a very big positive with a third outsized gain in a row, at plus 1.7 percent in May vs 2.0 percent and 4.0 percent in the two prior months. This reflects very strong consumer demand for cars and trucks underscoring unit vehicle sales which, in previously released data, are the strongest in 10 years. Excluding vehicles, however, the decline in May manufacturing slips another tenth to minus 0.3 percent. Another area of strength is capital goods which is showing life in the durable goods report and which here, tracked in the business equipment subcomponent, shows a 0.2 percent gain for May. 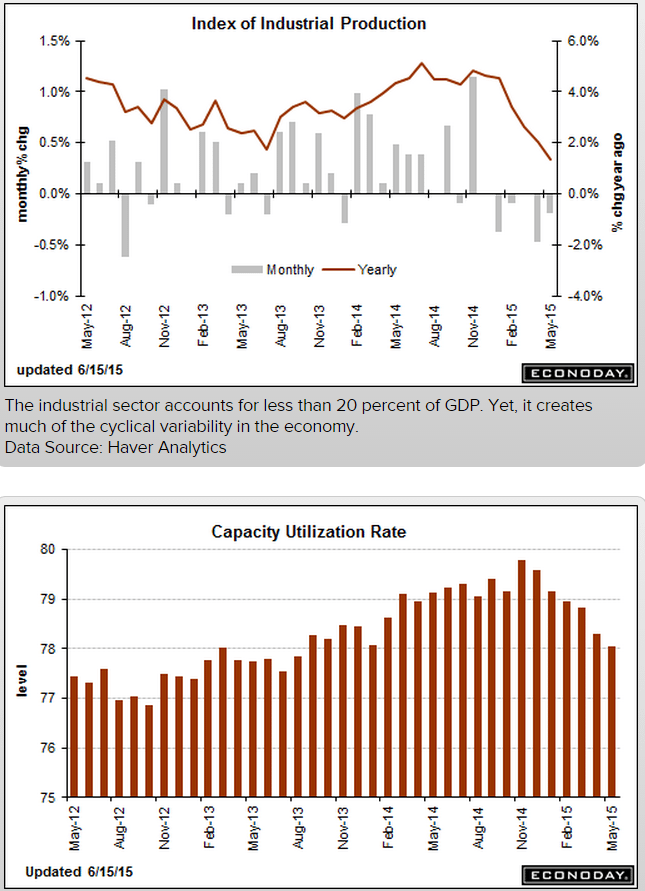 On a brighter note the remaining home builders are reporting that things are looking up some. But a few % pts gain in this sector which is now less than half of what it used to be isn’t going to drive overall growth: 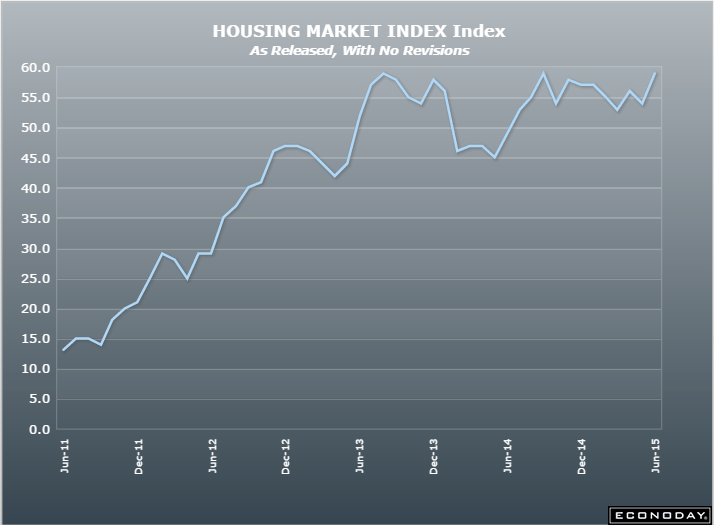 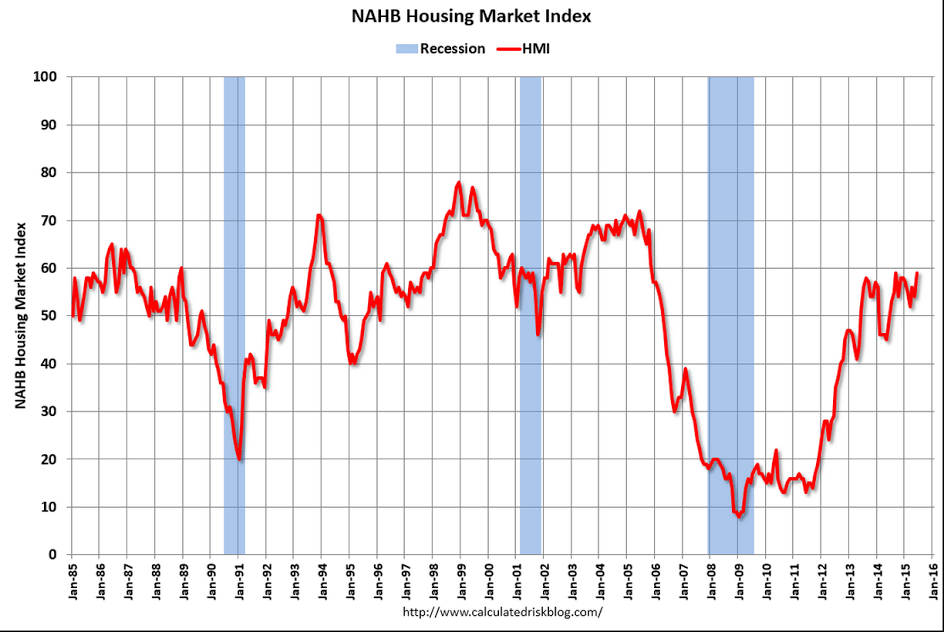 And yes, this is the euro zone’s vulnerability and inevitable with an export surplus:

11:00:00 RTRS – GERMANY’S BUNDESBANK SAYS IF THE EURO APPRECIATES STRONGLY, DOWNSIDE RISKS FOR THE ECONOMY WOULD RESULT