When one analyzes the economy, there are always some sections which do better than others. When the economic growth is weak (like currently), several segments can be in contraction while others are expanding.

Everything but the needed fiscal relaxation:

May 23 (Reuters) — “The current situation in the euro area demonstrates that this delay could be dangerous,” ECB President Mario Draghi said while acknowledging progress had been made, for example with banking union. But private risks need to be shared within the euro zone, with financial integration improving access to credit for companies and leading to a complete capital markets union, Draghi said. Countries should observe common standards when implementing structural reforms but also take a country-specific approach, as part of a process of “convergence in the capacity of our economies to resist shocks and grow together”.

Looks like our trade deficit is still on the rise:

“Exports to the United States rose 21.4 percent in the year to April, keeping the pace of gains in the previous month with brisk shipments of cars and vehicle engines.”

Chart not looking so good:

Up a bit after a dip in March but not much different from the Q1 average so hard to say Q2 is doing better than Q1 from this report:

Highlights
New home sales bounced back solidly in April, up 6.8 percent to a 517,000 annual rate that is on the high side of Econoday expectations. Strength is centered in the South which is the largest and important housing region and where sales rose 5.8 percent, this however fails to reverse the region’s 11.8 percent drop in the prior month.

Supply rose slightly in the month, to 205,000 new homes on the market, but supply relative to sales fell to 4.8 months from 5.1 month. Low supply should encourage builders to bring more homes on the market but at the same time low supply hurts current sales. Price readings are mostly favorable led by a 4.1 percent rise in the median price to $297,300 for a strong 8.3 percent year-on-year gain.

Readings in this report are always volatile month-to-month but the gains for April underscore the recent surge in housing starts & permits and help offset last week’s disappointing weakness in existing home sales. The housing sector is still trying to get off the ground but indications, taken together, are improving. 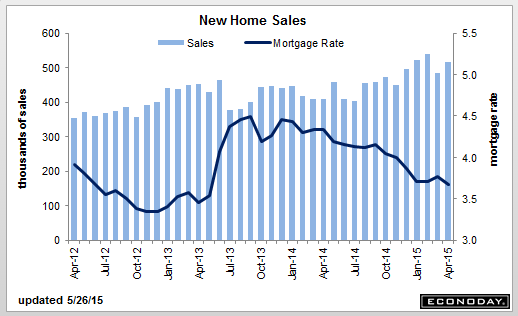 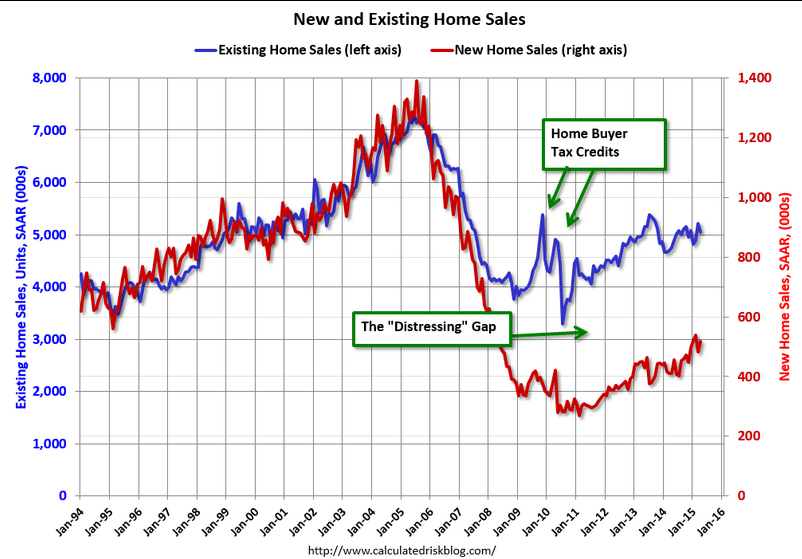 Again, doesn’t look like Q2 is doing any better than Q1 here either: 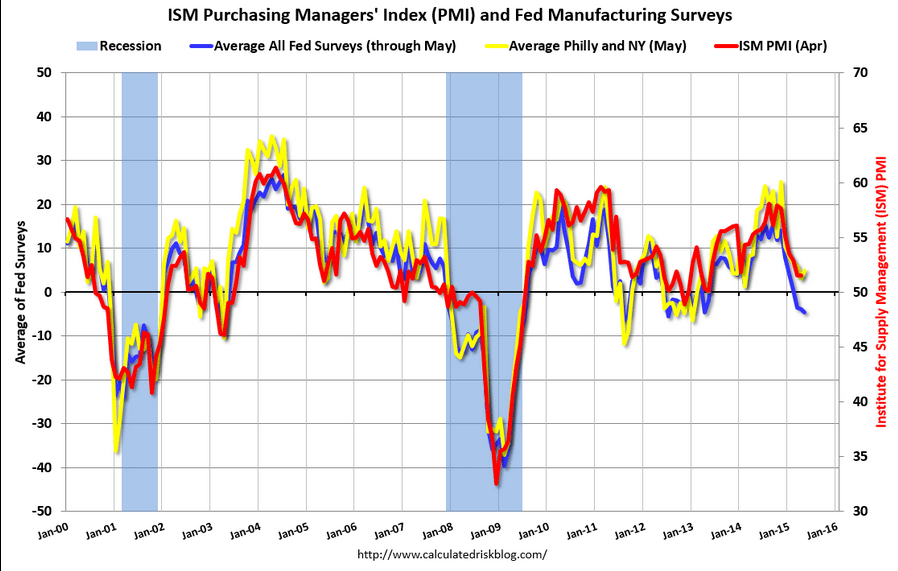 This is notable as my narrative is about the end of the energy capex that was chasing $100 oil that had been keeping total US GDP positive in 2014. This key indicator of that energy investment is showing the deep cuts have not stabilized but are continuing to take their toll, and the drop in total spending and income necessarily ripples out to the rest of the US and global economies. And note the continuing reports of weakness in exports, as the foreign sector drop in oil capex reduces their ability to import:

Highlights
Contraction in the energy sector continues to pull the Dallas Fed report into deeply negative ground, to a headline minus 20.8 vs minus 16.0 and minus 17.4 in the prior two months. Production shows a turn for the worse, at minus 13.5 vs April’s minus 4.7, as does employment, at minus 8.2 vs plus 1.8. New orders remain deeply negative, at minus 14.1 vs minus 14.0. Prices paid also fell further though the decline is easing, to minus 1.7 from minus 11.2.

The regional Fed reports all point to another slow month for the manufacturing sector which is struggling with energy contraction, especially evident in this report, as well as weakness in exports.

Texas factory activity declined again in May, according to business executives responding to the Texas Manufacturing Outlook Survey. … The general business activity index fell to -20.8 in May, its lowest reading since June 2009.

Highlights
Regional Fed reports on the manufacturing sector continue to be soft with Richmond’s at only plus 1 for May following two prior months of declines. New orders, after three straight declines, did rise but only to plus 2. Backlog orders, however, remain deep in the negative column at minus 10.

Employment growth is down while shipments are in contraction for a 4th month. Price readings are flat except for wages which show a big 11-point gain to 20. Wage pressures are a trigger for an FOMC rate hike and this reading, though isolated, will get the attention of the hawks at the Fed.

First it was Empire State, then the Philly Fed, then Kansas City, all showing weakness this month and now including Richmond. Data from the Dallas Fed, also released this morning, is especially weak. The manufacturing sector is having a tough time gaining momentum, held down by weak exports and contraction in the energy sector.

This is one man one vote, not one dollar one vote, and is another indicator where Q2 isn’t doing as well as Q1: 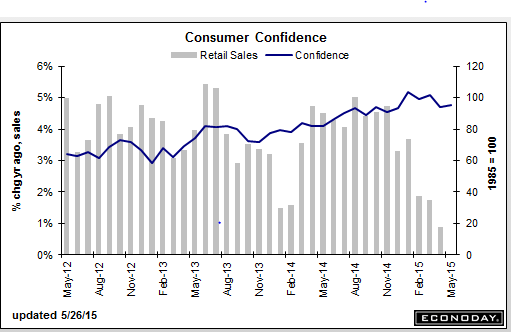