Fed also re opening swap lines to ECB – looks ready to do more unsecured dollar lending to them and maybe others.

They look to be doing what they did last time around to keep libor down – lend unsecured to bad credits. High risk but it does get rates down. 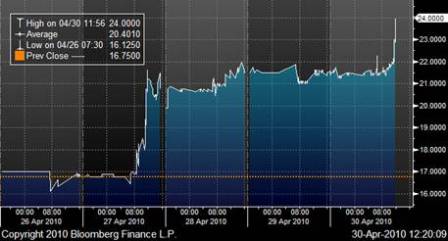 Term deposits, which are deposits with specified maturity dates that are held by eligible institutions at Reserve Banks, will be offered through a Term Deposit Facility (TDF). Term deposits will be one of several tools that the Federal Reserve could employ to drain reserves when policymakers judge that it is appropriate to begin moving to a less accommodative stance of monetary policy. The development of the TDF is a matter of prudent planning and has no implication for the near-term conduct of monetary policy.

The amendments approved by the Board are a necessary step in the implementation of the TDF. As noted in the attached Federal Register notice, the Federal Reserve anticipates that it will conduct small-value offerings of term deposits under the TDF in coming months to ensure the effective operation of the TDF and to help eligible institutions to become familiar with the term-deposit program. More detailed information about the structure and operation of the TDF, including information on the steps necessary for eligible institutions to participate in the program, will be provided later.

The amendments will be effective 30 days after publication in the Federal Register, which is expected shortly.