As previously suspected, last month’s higher print was just a bit of volatility on the way down, as per the chart:

Highlights
Another month and another month of wild volatility for the Chicago PMI which lurched from solid expansion in January to noticeable contraction in February. At a headline 47.6, Chicago’s PMI has fallen outside Econoday’s consensus range for a third month in a row! Still, this report is closely watched and confirms other early indications of February softness, not only for manufacturing but for services as well since this report tracks both sectors. The good news in the report is that new orders have held over breakeven 50 which hints at better readings in next month’s report. Now the bad news. Production is down sharply, backlogs are in a 13th month of straight contraction, employment is down and in a fifth month of contraction, and prices paid are contracting at the fastest pace since 2009. The resilience in new orders limits the signal of damage from this report, but production and other activity look to have slowed in February following respectable strength in January. 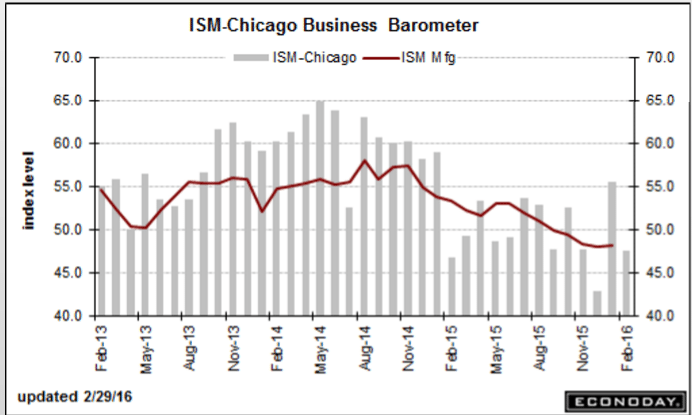 Another bad one, as the weakness that began with oil capex continues to dampen the rest:

Highlights
Pending sales of existing homes slowed in January, down an unexpected 2.5 percent to an index level of 106.0 in a decline offset but only in part by an 8-tenths upward revision to December to plus 0.9 percent. Econoday forecasters were expecting a much better reading, at a consensus plus 0.5 percent for January sales. Sales in the month fell in three of the four regions with only the South in the plus column. Year-on-year, pending sales are up only 1.4 percent. Today’s report is yet another disappointment for a sector that, despite high employment and low mortgage rates, is getting off to a flat start for 2016.

The oil patch is where the recession started and it keeps getting worse which means the rest of the economy will continue to deteriorate as well:

Highlights
Dallas, together with Kansas City, are two Fed districts that are being hit hardest by the collapse in oil prices. The Dallas Fed’s general activity index came in at a deeply minus 31.8 in February vs minus 34.6 in January. New orders contracted a further 8.4 points in the month to minus 17.6 for their lowest reading since 2009 in what is a very ominous signal for the months ahead. Unfilled orders are also in contraction as are production and shipments. Price contraction deepened for both raw materials and selling prices. Inventories are down as is employment. In fact, in a rare sweep of weakness, all 17 current components are in contraction! The company outlook index is at minus 17.4 with a quarter of the sample saying their outlook has worsened during February. The latter is a telling reading and suggests very strongly, in line with all other anecdotal readings this month, that the factory sector, hit by weak exports and a weak energy sector, fell back in February. 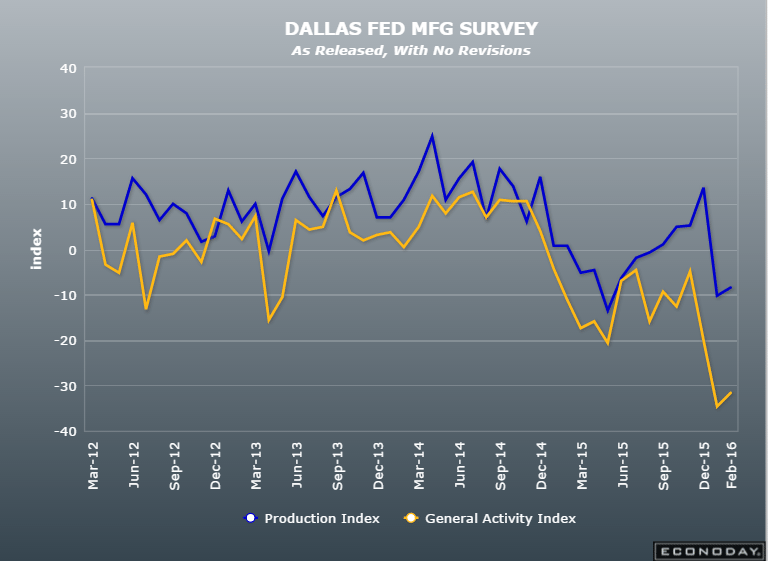 Fundamentally high inflation = weaker currency as higher prices means the same amount of currency buys less,etc. and deflation = a fundamentally stronger currency. However, the euro has been falling on news of deflation, as portfolio mangers, traders, etc. sell what euro they still have (or get outright short), their logic/fears being that deflation will trigger more inflationary policy from the ECB, which has yet to ‘trigger’ inflation. Meanwhile, the lower euro, driven down by selling and not ‘fundamentals’, continues to support the large and growing trade surplus that removes net euro financial assets from global markets. This has been going on for maybe a couple of years now leaving the euro more and more ‘undervalued’ and in ever shorter supply:

Euro-Area Prices Decline Most in Year as ECB Mulls Easing

Feb 29 (Bloomberg) — The inflation rate in the 19-nation bloc declined to minus 0.2 from a positive reading of 0.3 percent in January,. Core inflation, which strips out volatile elements such as food and energy, was at 0.7 percent, down from 1 percent in the prior month. In Germany, the European Union- harmonized inflation rate dropped to minus 0.2 percent from 0.4 percent. The rate in France fell to minus 0.1 percent, while Spanish prices slid 0.9 percent. The ECB has already cut its deposit rate to minus 0.3 percent and is pumping 60 billion euros ($66 billion) a month into the economy via asset purchases.

The world’s top economies are set to declare on Saturday that they need to look beyond ultra-low interest rates and printing money if the global economy is to shake off its torpor, while promising a new focus on structural reform to spark activity.

A draft of the communique to be issued by the Group of 20 (G-20) finance ministers and central bankers at the end of a two-day meeting in Shanghai reflected myriad concerns and policy frictions that have been exacerbated by economic uncertainty and market turbulence in recent months.

“The global recovery continues, but it remains uneven and falls short of our ambition for strong, sustainable and balanced growth,” the leaders said in a draft seen by Reuters.

Geopolitics figured prominently, with the draft noting risks and vulnerabilities had risen against a backdrop that includes the shock of a potential British exit from the European Union, which will be decided in a June 23 referendum, rising numbers of refugees and migrants, and downgraded global growth prospects.

But there was no sign of coordinated stimulus spending to spark activity, as some investors had been hoping after the market turmoil that began 2016.

Germany had made it clear it was not keen on new stimulus, with Finance Minister Wolfgang Schaeuble saying on Friday the debt-financed growth model had reached its limits.

“It is even causing new problems, raising debt, causing bubbles and excessive risk taking, zombifying the economy,” he said.

This is from a story about Virginia’s claims for unemployment which are down even as the economy has weakened:

Colonna said the dip to 1974 levels in new unemployment claims is baffling since economic growth has been so sluggish in Virginia recently.

And for the 12 months ended in July, the number of Virginians working rose by just 12,200, or 0.3 percent, the Virginia Employment Commission reports. The number who were unemployed declined by 33,000 – a figure that’s larger because it includes people who have stopped looking.

Part-time workers can’t always qualify for benefits when they are laid off, since to receive the minimum $60 a week unemployment benefit in Virginia, a person must have earned at least $3,000 during two of the previous five quarters.