Highlights
Vehicles are back on top, helping to lift retail sales to a 0.2 percent gain in January. Excluding vehicles and pulled down by falling gas prices, sales inched only 0.1 percent higher. But retail sales excluding gasoline stations — which is a central reading given the price fall — are up 0.4 percent for a very respectable year-on-year gain of 4.5 percent. The reading excluding both autos and gasoline is also up 0.4 percent in the month for a year-on-year rate of plus 3.8 percent.

General merchandise sales, which have been soft reflecting price contraction for imports, rose a sharp 0.8 percent in January. Building materials rose 0.6 percent as did vehicles where the year-on-year rate is at plus 6.9 percent. Non-store retailers, reflecting building strength for e-commerce, are once again a standout, up 1.6 percent for a year-on-year 8.7 percent gain.

But there are soft spots in January including restaurants, down 0.5 percent but following a very strong run in prior months, and also furniture, also down 0.5 percent. Sporting goods, a discretionary but still small component, were also weak though the year-on-year rate is leading all the data at 9.1 percent.

A positive are upward revisions to December, now at plus 0.2 percent overall with ex-auto ex-gas now at plus 0.1 percent. Though many readings are modest, this report — especially the ex-gasoline reading — points to a healthy U.S. consumer and should lift confidence in first-quarter growth.

Doesn’t look all that strong to me. And there’s been an conspicuous flattening since July: 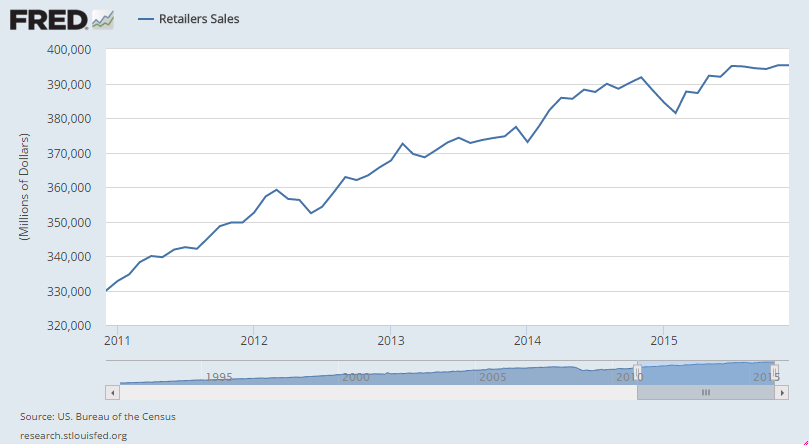 Just an fyi on light weight truck sales- growth has been falling off: 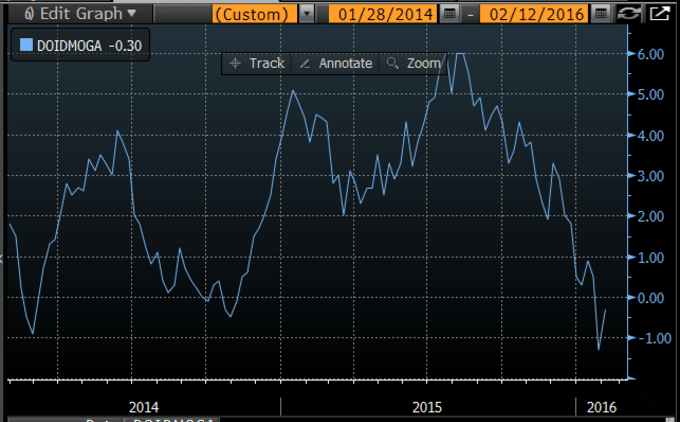 Export prices fell 0.8 percent in January and reflect, in bad news for the farming sector, a 1.1 percent decline in prices of agricultural exports. Year-on-year, export prices are down 5.7 percent with agricultural products down 12.7 percent.

Price contraction for finished goods is easing though only incrementally. Import prices for both vehicles and consumer goods inched higher in the month with contraction in year-on-year rates narrowing, to only minus 0.3 percent for consumer goods. The export side also shows price improvement.

This report does fit in with FOMC expectations for an easing downward pull from import prices, at least excluding oil with prices for the latter, sooner or later as policy makers argue, certain to firm. An immediate plus is ongoing strength in the dollar which is pointing to easing import-price contraction for the February report. 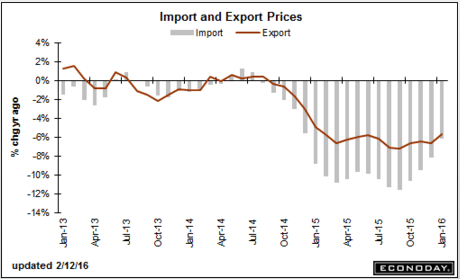 Inventories still too high and climbing as sales continue to fall short of expectations: 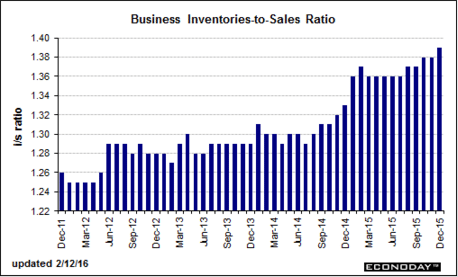 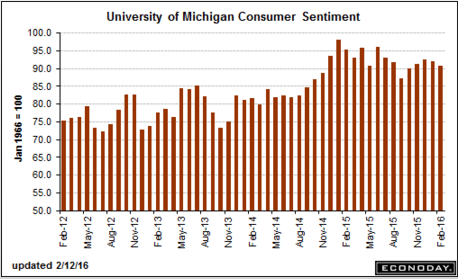