February 1 (NYT) — Matthew Yglesias says what needs to be said about Argentina: theres no contradiction at all between saying that Argentina was right to follow heterodox policies in 2002, but it is wrong to be rejecting advice to curb deficits and control inflation now. I know some people find this hard to grasp, but the effects of economic policies, and the appropriate policies to follow, depend on circumstances.

Yes, unemployment- source of the greatest economic loss as well as a social tragedy and a crime against humanity, is always the evidence deficit spending is too low. There is no exception as a simple point of logic. The currency is a simple public monopoly, and the excess capacity we call unemployment- people looking to sell their labor in exchange for units of that currency- is necessarily a consequence of the monopolist restricting the supply of net financial assets.

I would add that we know what those circumstances are! Running deficits and printing lots of money are inflationary

Why the undefined ambiguous empty rhetoric?

What does ‘bad’ mean here? For example, there is no evidence that inflation rates at least up to 40% hurt real growth, and more likely help it. Politically, however, it may be ‘very bad’. But those are two different things.

in economies that are constrained by limited supply;

Limited supply of what? Labor? Hardly! In fact, full employment is even more critical, if that’s possible, when there are limited supplies of other resources. Wasn’t Rome built without electricity, oil, bulldozers, the IMF, etc. etc.? OK, it took more than a day, but it was built. There is always more to do than people to do it. Economically, unemployment is never appropriate policy.

they are good things when the problem is persistently inadequate demand.

Unemployment is the evidence of this ‘inadequate demand’ which is necessarily created by taxation, the ultimate source of all demand for a given currency. In fact, taxation functions first to create unemployment- people looking for work paid in that currency. That’s how govt provisions itself- it creates people looking for jobs with its taxation, then hires those unemployed its tax created. What sense does it make for govt to create more unemployed than it wants to hire??? Either hire the unemployed thus created, or lower the tax!!!!!!!!!!!!

With more that needs to be done than there are people to do it, the economy isn’t supply constrained until full employment. And nominal unemployment benefits are about the level of prices, wages, and the distribution of income rather than the level of potential employment, etc.

So sometimes the relationship and money looks like this, from the best economics principles textbook: 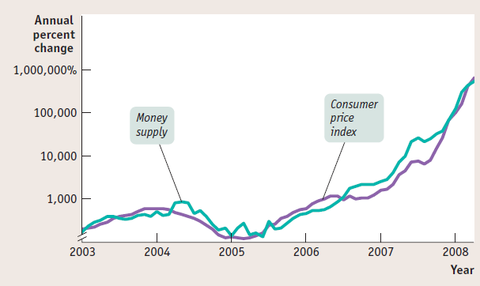 This is more about ‘inflation’ causing ‘money’ as defined. 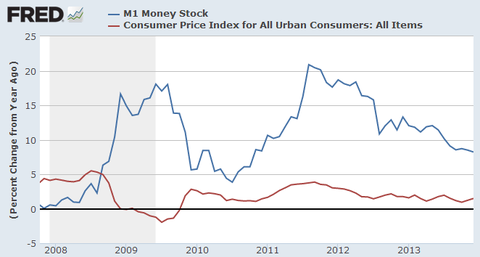 And just to repeat a point Ive made many times, those of us who understood IS-LM predicted in advance that the actions of the Bernanke Fed wouldnt be inflationary, while the other side of the debate was screaming debasement.

There’s something else to be said about Argentina and, it seems, Turkey namely, that were seeing a mini-revival of what Rudi Dornbusch and Sebastian Edwards long ago called macroeconomic populism. This involves, you might say, making the symmetrical error to that of people who think that running deficits and printing money always turns you into Zimbabwe; its the belief that the orthodox rules never apply. And its an equally severe mistake.

Unfortunately most of the ‘orthodox rules’ apply to the fixed fx policies in place when they were first stated, and not to today’s floating fx.

Its not a common mistake these days; a few years ago one would have said that only Venezuela was making the old mistakes, and even now its just a handful of countries. But it is a mistake, and we need to say so.

Yes, mistakes are being made by all of the headline economists and the global economy is paying the price.