Seven countries in emerging Asia – China, Hong Kong, India, Korea, Singapore, Taiwan and Thailand – have released trade data for June, and year-on-year export growth in six of these was negative, the exception being Taiwan. For the “Asian 7” in aggregate, export growth slowed from 7.6% y-o-y in April to 0.3% in May, and to -2.0% in June.

Of the Asian 7 all but India have released exports by destination, so from the remaining Asian 6 we can assess where demand for Asian exports is slackening. Earlier this year, Asian exports held up because weak shipments to Japan and the EU were offset by stronger shipments to the US, emerging Asia itself and the rest of the world.

However, in recent months there has been a broad-based weakening in Asian exports by destination. Even intra-Asian export growth has started to cool, in part due to China’s slowing economy. Much hinges on recoveries in some of the big advanced economies to counter ebbing growth in EM, but this has yet to show up in Asia’s export data. 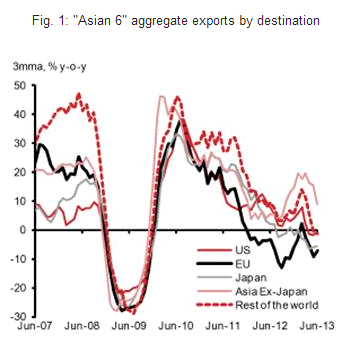