Home  »  Deficit • GDP • Government Spending   »   What Happens When the Government Tightens its Belt?

What Happens When the Government Tightens its Belt?

The laws of accounting allow us to demonstrate that similarly powerful concepts apply to the science of economics. Beginning with the simple identity for GDP in a closed economy, we have:

For economists, this is as obvious as stating that a linear foot is the sum of 12 sequential inches. It simply recognizes that the total amount of money spent buying newly produced goods and services will yield an equivalent income to the sellers of these products. Thus, it demonstrates that expenditures are a source of income.

Once earned, income can be allocated in one of three ways. At the end of the day, all income (Y) will be spent (C), saved (S) or used in payment of taxes (T):

Since they are equivalent expressions for Y, we can set equation [1] equal to equation [2], giving us:

Or, after canceling (C) from both sides and moving terms around:

In the above scenario, the government is balancing its receipts (T) and expenditures (G), and you are balancing your savings and investment spending. There is no net gain/loss.

This should make intuitive as well as mathematical sense, because when Uncle Sam runs a deficit, you receive more financial assets than you lose through taxation. Put simply, Uncle Sam’s deficit lifts you into a surplus position. Moreover, bigger deficits mean bigger surpluses for you.

Finally, let’s see what happens when Uncle Sam tightens his belt. Suppose, for example, that we were able to duplicate the much-coveted surpluses of 1999-2001. What would (and did!) happen to the private sector’s financial position? 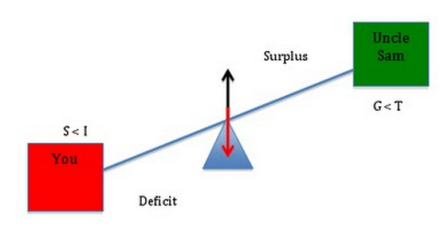 Because the economy’s financial flows are a closed system – every payment must come from somewhere and end up somewhere – one sector’s surplus is always the other sector’s deficit. As the government “tightens” its belt, it “lightens” its load on the teeter-totter, shifting the relative burden onto you.

This is not rocket science, but it appears to befuddle scores of educated people, including President Obama, who said, “small businesses and families are tightening their belts. Their government should, too.” This kind of rhetoric may temporarily boost his approval ratings, but the policy itself will undermine the efforts of the very families and small businesses that are trying to improve their financial positions.

* I’ll be back with a second installment that shows what happens when we ‘open’ the economy to take into account the foreign sector (and the relevant financial flows). Many of us have been working with financial balance equations for years (see herefor references), so the current effort is nothing new. I am merely trying to make the arguments more accessible by changing the way they are presented.