The goods portion of October’s trade deficit is deeper than expected, at $77.2 billion vs expectations for $76.9 billion and compared with a monthly average in the third-quarter of $74.6 billion. October’s data opens fourth-quarter net exports on a negative note following the third quarter when trade pulled down GDP pace by nearly 2 percentage points. Today’s results point to further downward pressure for the fourth quarter.

Exports open the quarter down 0.6 percent to $140.5 billion in October yet are still up 7.8 percent from a year ago. In a possible tariff effect, exports of food, feeds & beverages continue to turn lower, down 6.8 percent in the month to $10.3 billion with this year-on-year rate negative at minus 2.8 percent. Exports of capital goods also fell as did auto exports with consumer goods and industrial supplies showing gains.

Imports, at $217.8 billion, rose only 0.1 percent in October for a year-on-year gain of 10.0 percent. Imports of consumer goods, at $57.4 billion and a sensitive topic in the trade wars, rose an outsized 3.5 percent in October with auto imports up 2.3 percent. Imports of capital goods fell sharply in the month in a negative sign for business investment.

Tariffs effects have been elusive in the nation’s economic data but may now be appearing in the trade data, and the initial results may be holding down GDP. 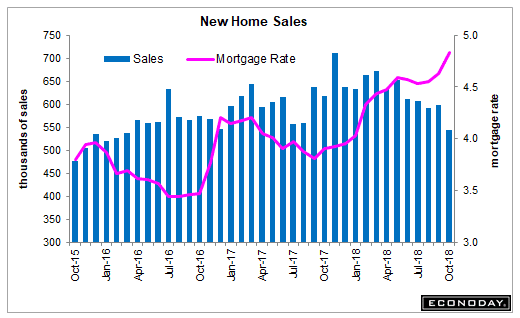 Rate hikes cause gov interest payments to rise and provide income that works to support the economy: