Weaker than expected, with the prior two months revised downward by a net 9,000 jobs. In any case employment growth continues its multi-year deceleration that began with the collapse of oil capex:

Hiring cooled though employment levels are very high and there’s also a hint of wage inflation in December’s employment report. Nonfarm payrolls rose 148,000 which is lower than expected but still favorable and enough to absorb new entrants into the jobs market. Revisions are slightly negative with November now sharply higher, now at 252,000, but October sharply lower, to 211,000 for a net 9,000 decline.

The number of unemployed actively looking for work rose slightly to 5.308 million with the unemployment rate remaining at a 17-low of 4.1 percent. The pool of available workers, which includes those not actively working but nevertheless wanting a job, held little changed at 11.884 million. The labor participation rate is also unchanged, at 62.7 percent.

Wage data show a little pressure as average hourly earnings rose a noticeable 0.3 percent on the month though November gets a 1 tenth downgrade to only a 0.1 percent gain. Year-on-year, this reading is moving in the right direction though very slowly, up 1 tenth to 2.5 percent.

The payroll breakdown shows two more outstanding months for construction, up 30,000, and manufacturing, up 25,000, in confirmation that housing and the factory sector accelerated into year end. Other industries are more subdued with retail falling 20,000 in results that will raise talk of brick-and-mortar decline while professional and business services rose a subdued 19,000 with the temporary help subcomponent up only 7,000. Weekly hours are unchanged in this report at 34.5.

The fundamental strength of this report contrasts a bit with the more moderate level of headline payroll growth and does raise the question, one that the Federal Reserve has been repeatedly asking in its Beige Book, whether scarcity of available, particularly skilled labor, is holding back business expansion — that employers simply can’t find the people they need.

Nothing new here- annual employment growth has been decelerating in a straight line for a long time, coincident with the general deceleration of bank credit, auto sales, housing, etc. all evidence of decelerating aggregate demand: 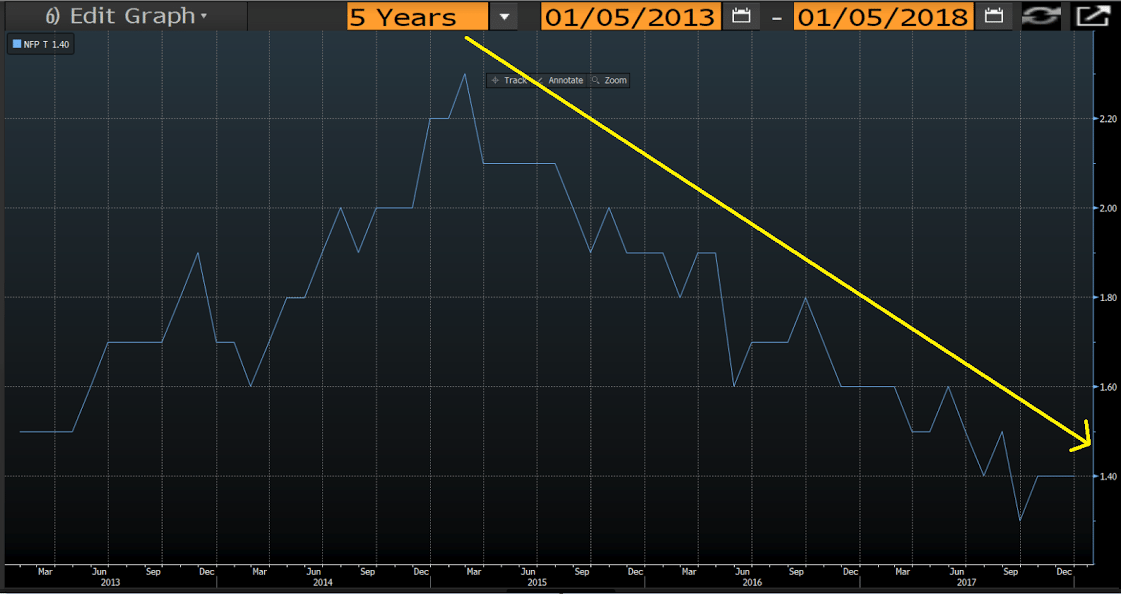 The US trade balance continues to modestly widen, which given current conditions that include higher oil prices, likely works to keep the $US under pressure: 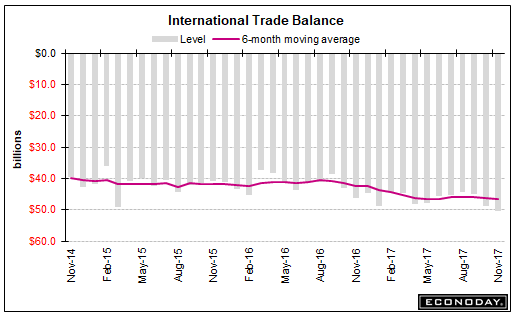