I don’t see any convincing evidence of a housing market revival, particularly with the growth of real estate lending remaining well below that of last year: 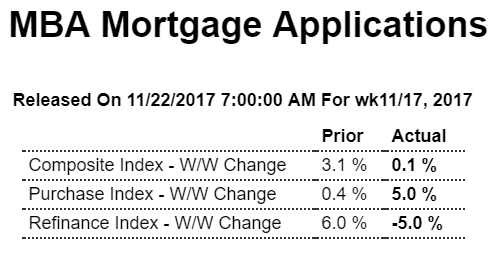 Purchase applications for home mortgages rose a seasonally adjusted 5 percent in the November 17 week, though overall mortgage activity was only barely higher (by 0.1 percent) than in the prior week as the increase in buyers was offset by a 5 percent decline in refinancing activity. On an unadjusted basis, the purchase index rose only 1 percent from the prior week, putting the year-on-year gain at 4 percent, down a sharp 14 percentage points from last week’s reading due to an outsized weekly jump higher in the index in the comparable week last year. The slowdown in refinancing took its share of mortgage activity down 1.4 percentage points from the prior week to 49.9 percent. Mortgage rates rose slightly though remaining at historically low levels, with the average interest rate on 30-year fixed-rate mortgages ($424,100 or less) up 2 basis points to 4.20 percent. Today’s report shows home-buyers quite active and adds to recent evidence of a housing market reviving in the fourth quarter, though the year-on-year gain, now at just 4 percent after much stronger readings for most of the year, suddenly looks much less impressive.

Durable goods orders, down 1.2 percent in October, couldn’t post three straight gains but there are positives in the report. But first the negatives which include a 33 percent reversal for commercial aircraft orders and a 0.5 percent decline for core capital goods orders (nondefense ex-aircraft). These two components have been very strong in recent months so a step back isn’t a surprise, and aircraft orders appear certain to jump sharply in next month’s report given Boeing’s major success at this month’s Dubai Air Show.

Ex-transportation offers an underlying reading and this is solid with a 0.4 percent gain. The revision to this reading for September is also positive, up 4 tenths to 1.1 percent. And core capital goods get an even bigger revision, an 8 tenths upgrade to 2.1 percent in September which helps offset October’s decline. Shipments of core capital goods, which are direct inputs into GDP, are also revised higher, up 5 tenths in September to 1.2 percent with October coming in at a constructive plus 0.4 percent. Other positives in the report are a 1.7 percent rise in vehicle orders and a 1.5 percent increase in vehicle production, both of which follow the ex-hurricane spike in vehicle sales.

Other readings are mixed including very modest 0.1 percent gains for both total shipments and total inventories and a disappointing no change for unfilled orders.

This report isn’t a step forward but the factory sector, nevertheless, still looks to be a positive contributor to fourth-quarter growth.

Modest growth recently but still not back on track since the collapse in oil capex at the end of 2014. And these charts are not adjusted for inflation: