Nice move up after a large move down. Note that the average of the last two months is about where this series has been. And, again, it’s the permits that count, and they are about the same as last month. And not to forget mortgage applications to buy homes fell a full 6% last week after rates went up in response to the election.

In data that will lift estimates for fourth-quarter GDP, housing starts surged 25.5 percent in October to a 1.323 million annualized rate. This is the best rate of the cycle, since August 2007 with the monthly percentage gain the strongest since 1982. The jump reflects a 10.7 percent rise to an 869,000 rate for the report’s key component, single-family homes, that follows an 8.4 percent surge in September. And multi-family homes snapped back from September’s odd 39 percent decline, rising 69 percent in October to a 454,000 rate.

But there’s less strength in permits which, however, did rise 0.3 percent to a 1.229 million rate. Importantly, single-family permits are up 2.7 percent in the data to offset a 3.3 percent dip for multi-family homes.

There’s plenty of strength in this report but it’s centered in the near-term, less so in the coming months. Other data include a 5.5 percent gain for completions to a 1.055 million rate led here by a 9.7 percent gain for the multi-family component with single-family homes up a very solid 3.9 percent. Regionally the West, which is key region for builders, is showing the most strength in this report followed by the Midwest. The South is mixed and the Northeast is mostly soft. 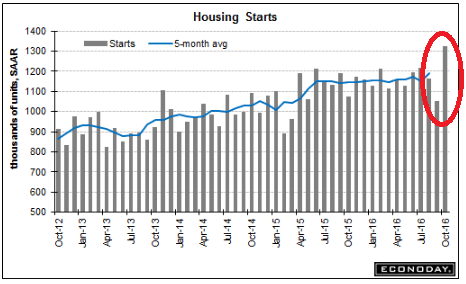 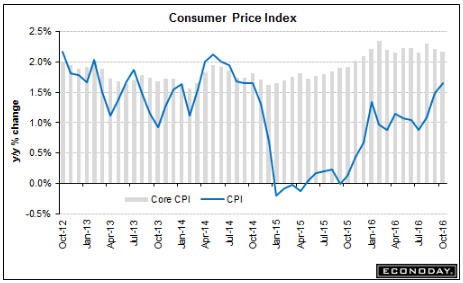 The Philly Fed continues to pick up signs of strength in the long dormant factory sector. The November headline looks tame at plus 7.6 but most of the details are very strong. New orders are up for a third month in a row and at very sharp multi-year high of 18.6. And unfilled orders make a rare appearance in the plus column at 4.1.

Shipments are at 19.5 and inventories, which are usually negative, are also in the plus column and strongly so at 13.4. Underscoring all the strength is solid and sudden life in prices with input costs surging nearly 20 points to 27.5 and selling prices also surging nearly 20 points to 16.0. The weakness in the report is in employment which continues to run in the negative column, at minus 2.6. However, if the strength in orders is repeated in the coming months, new hiring in the Mid-Atlantic factory sector is bound to begin.

Today’s report adds to a mix of indications, including the details of yesterday’s industrial production report, that the factory sector appears to be accelerating into the 2016 close.