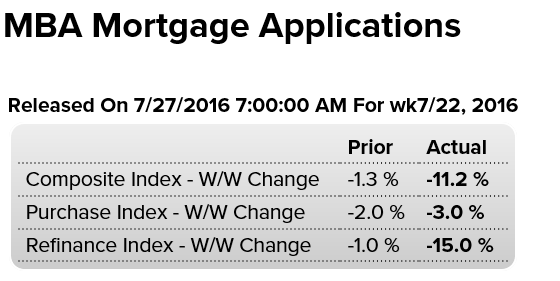 Highlights
Purchase applications for home mortgages were down 3.0 percent in the July 22 week following the previous week’s 2.0 percent decline, while refinancing applications, which tend to be even more sensitive to interest rates, fell a sharp 15.0 percent. The decrease brought the Purchase Index down to the lowest level since February, and the year-on-year gain in purchase applications was pared down to 12 percent from the prior week’s 16 percent gain. Mortgage rates extended their rebound from three-year lows, with the average rate for 30-year fixed-rate mortgages on conforming loans ($417,000 or less) rising 4 basis points to 3.69 percent. The second weekly decline in purchase applications in tandem with increases in mortgage rates underscores the current dependency of the housing market on low-interest financing. Especially if rates have already bottomed, the Mortgage Bankers Association report indicates a slowdown in home sales growth, which had been robust in part thanks to extremely low and declining mortgage rates.

Highlights
Orders proved very weak for the factory sector for a second straight month in June, down 4.0 percent and outside Econoday’s low estimate. Core readings are also soft with ex-transportation also lower for a second month, down 0.5 percent, with core capital goods (nondefense ex-aircraft) higher but up by only 0.2 percent and following two straight prior declines of 0.5 and 0.9 percent.

Orders for civilian aircraft, which are always volatile month to month, fell nearly 60 percent in June, offsetting for the transportation group a solid 2.6 percent gain for vehicles. But vehicles are by far the best news in the report with nearly all other sectors posting declines and some sharp declines including computers, down 9.1 percent in the month, communications equipment at minus 2.3 percent, and primary metals down 1.3 percent.

Total unfilled orders are a very serious negative, down 0.9 percent following no change in May and suggesting that factories have been keeping production up by working off backlogs which is a negative for future employment. And factories did keep busy in the month as indicated by the previously released industrial production report and by a 0.4 percent gain for shipments in this report. A plus for employment is another draw in inventories, down 0.2 percent and taking the stock-to-sales ratio down to 1.64 from 1.65.

Year-on-year rates reinforce the sense of weakness. Total orders are down 6.4 percent which outside of an aircraft-distorted 19 percent decline in July last year is the weakest in 4 years. Ex-transportation orders are down a year-on-year 3.6 percent with core capital goods down 3.7 percent which, strikingly, is the 17th decline in 18 months — confirmation of weakness in both domestic and global business investment. Shipments of capital goods, which are inputs into the nonresidential fixed investment component of GDP, fell 0.4 percent in June which is a second straight decrease and will not be raising estimates for Friday’s second-quarter GDP report.

Anecdotal reports on the factory sector have been less negative than this report, which however is a definitive report. And the monthly headline decline in today’s report is the most severe since August 2014. The factory sector may not be coming be alive as hoped going into the second half of the year. 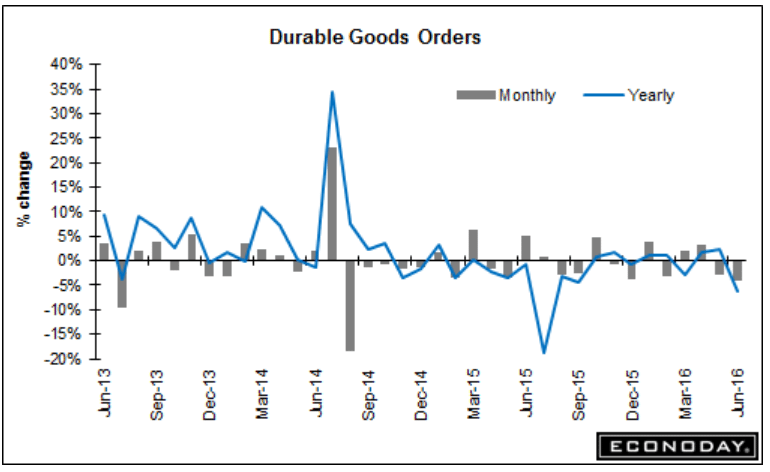 Highlights
Pending sales of existing homes, which track contract signings, have been showing less strength this year than final sales, a factor that may limit disappointment over June’s thin 0.2 percent rise. Year-on-year, pending sales are up only 1.0 percent vs 3.0 percent for final sales. Regional data for pending sales, as they are in the existing home sales report, are unusually balanced, ranging from a year-on-year plus 1.8 percent for the South to minus 1.8 percent for the West. Housing data have been choppy but healthy, pushing to cycle highs during the spring selling season, though this report does hint perhaps at a possible flat patch for the summer.

Earnings way down, but marginally better than expected so rally time! (Apple sales are/were about 1% of GDP)

July 26 (WSJ) — Apple Inc. said its quarterly profit fell 27%. Revenue fell for a second straight quarter. Apple said net income was $7.8 billion in the fiscal third quarter that ended June 25, down from $10.68 billion in the year-ago period. Earnings per share fell to $1.42 from $1.85. Revenue declined 14.6% to $42.36 billion from $49.6 billion a year earlier. Apple said it sold 40.4 million iPhones during the three-month period, compared with sales of 47.5 million units a year earlier. While iPad revenue increased 7% because of its pricier iPad Pro, unit sales fell for a 10th-straight quarter, down 9% to 9.95 million.

July 26 (WSJ) — Second-quarter sales of machinery and engines dropped 17% from a year ago to $9.65 billion. Operating profit from machinery and engines plunged 44% to $678 million. Caterpillar trimmed its full-year profit outlook to about $2.75 a share, or $3.55, without restricting costs. The company had previously forecast $3 a share, or $3.70 without restructuring. Over all for the quarter, the company reported a profit of $550 million, or 93 cents a share, down from $802 million, or $1.31 a share, a year earlier. Excluding restructuring costs, earnings per share were $1.09. Revenue slid 16% to $10.34 billion.