A shocker for most analysts/entirely in line with my narrative of insufficient deficit spending-public or private-to offset unspent income, aka demand leakages. And it’s only going to get worse until appropriate fiscal adjustments are implemented. The cut in oil capex, which was the only thing supporting growth after the tax hikes and sequesters, triggered a downward spiral, with lower employment, lower income, and lower spending working it’s way through the economy.

Highlights
Forget about an October rate hike and maybe forget about a December one too. The September employment report came in weaker than expected on all scores with nonfarm payroll at 142,000, well under the low estimate for 180,000. To seal the matter, downward revisions to the two prior months total 59,000. Average hourly earnings also came in below the low end estimate, at an unchanged reading and a year-on-year rate of 2.2 percent which is also unchanged. And the labor market is shrinking! The labor participation fell 2 tenths to a nearly 40 year low of 62.4 percent.

Note how it all went bad after oil prices collapsed: 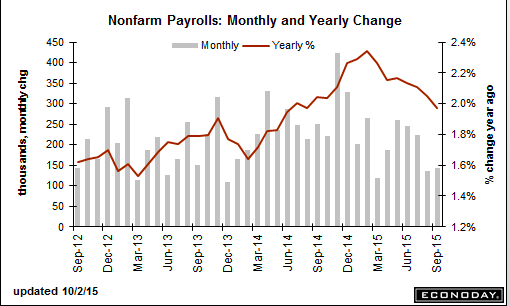 Back down to .9% on reduced exports, and soon to go lower with the employment revisions: 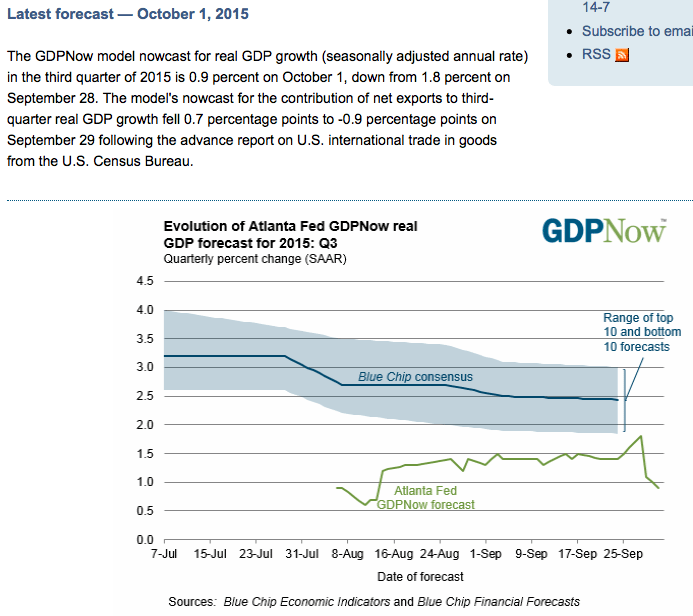 Managing expectations as they rearrange the deck chairs on the Titanic…:

Oct 2 (WSJ) — ECB President Mario Draghi said the eurozone had returned to “sustained growth, under the impulse of our monetary policy.” The results were “good news for everybody, everywhere,” he said. Mr. Draghi said the eurozone accounts for 17% of global GDP and 16% of global trade, so the strength of the eurozone was critical to maintain at a time of uneven global growth. “The progress achieved over the past three years to stabilize and strengthen the euro area is real,” he said. “Growth is returning. The way forward is well identified. And we will not rest until our monetary union is complete.”