In case anyone thinks currency depreciation and tax hikes were the path to domestic bliss:

Highlights
Retail sales plummeted a greater than expected 9.7 percent from a year ago. This was the third consecutive month sales declined. March’s result marks a fresh historic low in the data. The data do not bode well for first quarter consumer spending, a major portion of GDP. For the fiscal year, sales retreated 1.2 percent after rising 2.9 percent in fiscal year 2013.

All the subcategories were lower on the year. Auto sales dropped for a sixth consecutive month, this time by 4.1 percent on the year after sliding 2.6 percent the month before. Fuel sales sank 20 percent after 17.9 percent, no doubt partially attributable to the decline in crude oil. Retail machinery sales dropped for a twelfth month, this time by 27.9 percent after sliding 9.6 percent the month before. Apparel sales were down 6.2 percent after increasing 2.0 percent in February.

Japanese consumers have cut back spending since April 2014 when the country’s sales tax was raised from 5 to 8 percent.

So the weakness is pretty much global now:

A first estimate from the Office of National Statistics (ONS), showed GDP had grown 0.3 percent quarter on quarter, below a forecast of 0.5 percent according to a poll of analysts by Reuters.

The data will not be welcomed by U.K. Prime Minister David Cameron, who has made the strength of the economy a key part of his campaign ahead of a general election on May 7. Sterling fell to $1.5185 after the data. 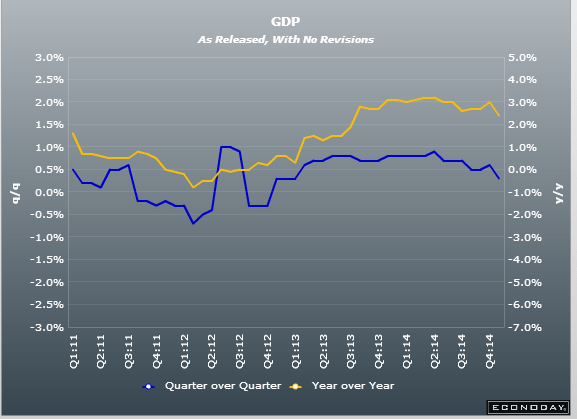 This isn’t going anywhere either: 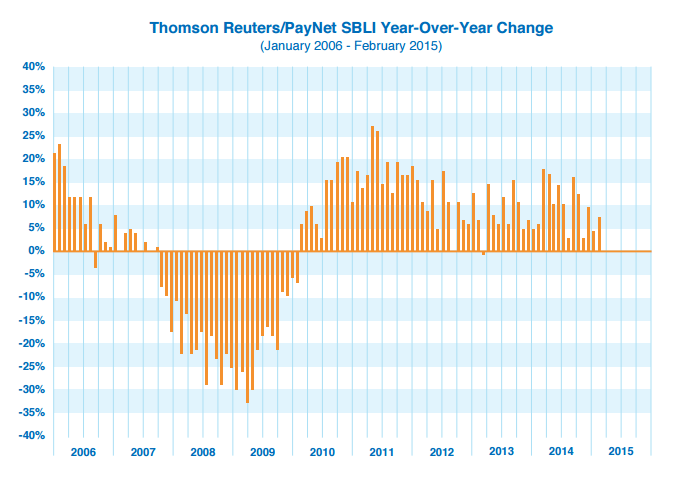 Economists are now seeing weakness but no chance of recession:

April 28 — Econintersect’s Economic Index is indicating growth will continue to be soft in May. The tracked sectors of the economy are relatively soft with most expanding but some contracting. The effects of the recently solved West Coast Port slowdown (a labor dispute which had been going on for months) and weather related issues are no longer evident in the raw data. Therefore, the economic slowdown forecast last month is cyclic and not resulting from transient causes.

There is NO evidence of recessionary dynamics in the data – just moderate weakness throughout most data sets. Our employment six month forecast discussed below continues to forecast relatively strong employment growth (even after last month’s rather poor jobs report) but economic pressures are now indicating a weakening of employment growth beginning in June.

Highlights
There have been two key factors holding down US manufacturing this year: weak export demand and weakness in the oil & gas sector. The latter is a special focus of the Dallas Fed manufacturing survey where readings have been severely depressed including today’s minus 16.0 reading for business activity and minus 4.7 reading on production.

New orders, arguably the most important reading of all, are at minus 14.0 with the related growth rate at minus 15.5 for its 6th straight negative reading. Companies in the sample are not upbeat about the outlook with this score coming in at a nearly 2-1/2 year low of minus 7.8. The workweek is down and capacity utilization is at a 6-year low of minus 10.4.

Looking at commentary, a few stand out: “Our oil & gas customers have come to a complete stop,” “Lower energy prices have adversely impacted our business in the energy sector,” and “It is going to be a tough summer.”

Yet, despite all the order and production weakness, employment moved from minus 1.8 in March to plus 1.8 in April, which is far from sizzling but is surprisingly in positive ground. 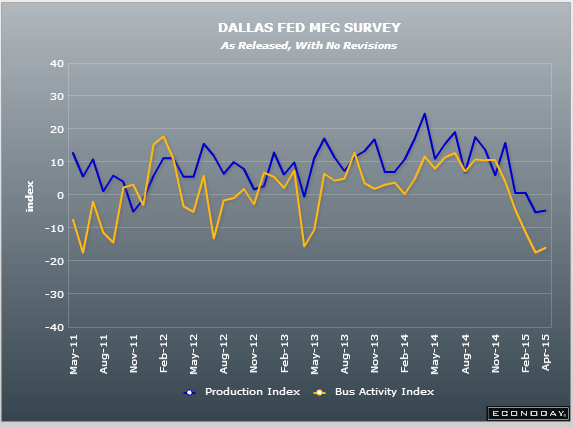 Lots of cheerleading in this commentary for a release that was below expectations:

Highlights
The service sector is a key driver for the US economy right now given the export-related struggles facing the factory sector. And the latest news is good with the PMI services flash coming in at a very strong 57.8. This indicates faster-than-average monthly growth vs the long-term average for this reading of 55.9. Growth in new orders remains strong and job hiring is described as robust, the latter offering a positive indication for April’s employment report.

Another very positive indication is how upbeat the survey sample is about the business outlook in what is a further indication that general economic weakness early in the year was only temporary. Cost pressures remain subdued though prices have ticked higher this month due likely to the increase underway for fuel costs which however remain low.

The domestic economy right now is healthy, a factor that should boost the housing market this spring and hopefully the jobs sector as well.