First, intervention in this direction- buying dollars- does ‘work’ and is infinitely sustainable.
It’s a political decision, much like the ECB buying national govt. debt. There is no nominal limit.

Second, the only reason they stopped was political pressure from the US, with the then Treasury secretary resorting to name calling like ‘currency manipulator’ and ‘outlaw.’ Otherwise the yen probably would not have been allowed to go under 100.

Fourth, this strategy causes the currency to strengthen and requires the govt. buy dollars to sustain desired levels of exports and employment.

Net exports necessarily equal net domestic holdings of foreign currency. Think of it this way. If Japan sells something to the US, and we pay for it in dollars, they have two choices. Either hold the dollars, in which case nothing more happens in the real economies and Japan has net exported and the US net imported. Or buy something in the US or any other nation with the dollars and import it to Japan in which case there are no net exports.

Japanese government started FX intervention last night with JY100bn in Tokyo and continued their effort in overseas and ended up with selling JY2trn in total. Many market participants are now saying that it will lead to monetary ease since BOJ will not absorb this JY2trn from the market and this is one of the main reasons for JGB rally today. However, I don’t think it will cause any such impact since government issues T-Bill for that amount (JY2trn) anyway.

When the BOJ buys dollars for the MOF, and pays for them with yen, that adds yen deposits to the domestic economy, thereby increasing the yen net financial assets held domestically. That’s an inflationary bias which is what they are trying to do.

In the first instance those newly added yen sit as yen balances in member accounts at the BOJ. And since they earn no interest the marginal cost of funds is 0, which happens to be where the BOJ wants it anyway.

But the quantity of balances per se is of no ‘monetary’ consequence. As I like to say, for central banking it’s necessarily about price (interest rates) and not quantities.

So with rates already at 0, there is no more ‘monetary easing’ possible. The only ‘monetary easing’ the BOJ can do at this point is bring longer rates down some, but there isn’t much scope for that either. And they probably know by now lowering long term rates does nothing of major consequence for the real economy.

The question now is how far they will go. They’d probably like the yen back to north of 100 vs the dollar, and will move slowly to see how much political pressure they get from the US as they move in that direction. In fact, they may already be getting political pressure. I don’t know either way.

With political pressure building for China to adjust their currency upward as the US elections approach, this move by Japan might attract more attention than otherwise.

The irony/tragedy for the US is, of course, we should welcome all such moves, open ourselves for virtually unlimited imports from anywhere in the world (with sufficient quality control restrictions- no poison dog food, contaminated wall board, etc.), and enjoy the tax cut that comes along with it so we have sufficient purchasing power to be able to buy all of our own domestic output at full employment plus whatever the rest of the world wants to net export to us.

And apparently that’s a LOT right now. So with current policy of grossly overtaxing us for the size govt. we currently have, the losses of grossly over taxing ourselves may be north of 30% of US gdp, which is a staggering loss for us, and gone forever.

The only thing between what we have now and unimaginable prosperity remains the space between the ears of our policy makers, etc. 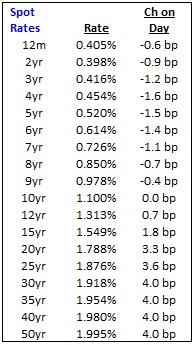