About as expected, with a relatively small increase from the tax cuts, which are a one time event. And the weakness in consumption hints at those receiving the cuts having a low propensity to spend. Also, the still too low personal savings rate suggests continuing weakness:

Core inflation did noticeably rise but not more than expected, at 0.3 percent in January but not enough to lift the year-on-year rate which holds at an as-expected 1.5 percent. Total prices, reflecting a rise in gas, rose 0.4 percent with this year-on-year rate also unchanged, at 1.7 percent. These results fit in with the Federal Reserve’s expectations for a gradual upward trend for prices but they don’t accelerate the outlook.

The income side of this report does show the effect of tax changes, as personal taxes fell 3.3 percent in the month to help underpin total income which rose a solid 0.4 percent for a second straight month. The wages & salaries component of income rose 0.5 percent for a second time in three months. Disposable personal income, after holding at 0.3 and 0.4 percent gains in prior months, rose 0.9 percent in January for the largest gain in a year.

Spending data are soft, up only 0.2 percent overall and marking a weak first-quarter start for the consumer. Spending on durable goods fell 1.5 percent on a downturn in vehicle sales offset by a gas-related 1.0 percent rise in non-durable spending and a 0.3 percent increase in service spending.

Reflecting the drop in taxes, the savings rate popped back higher in January, up 7 tenths to 3.2 percent. The gain in income is a positive not only for the savings outlook but the spending outlook as well. This report, despite the monthly weakness in spending, points to economic health, specifically rising income and gradually rising prices.

And another weak bit of hard data: 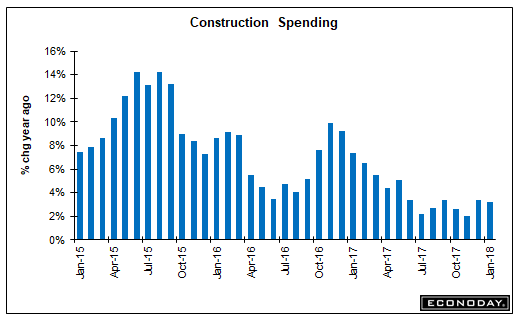 Manufacturing surveys again not in sync with each other: