Weaker than expected, downward revisions, depressed earnings growth and participation rate. And note how the year over year growth has been going down now in, for all practical purposes a straight line, for over 2 1/2 years, when the shale boom ended and oil capex collapsed:

August payroll growth, though solid, missed expectations while wage data clearly disappointed. Nonfarm payrolls rose 156,000 in the month vs Econoday’s consensus for 180,000. Revisions are negative with July revised 20,000 lower to 189,000 and June down 21,000 to 210,000. The unemployment rate reflects the softness, rising 1 tenth to 4.4 percent.

Average hourly earnings barely rose at all, up a monthly 0.1 percent with the year-on-year rate at 2.5 percent. These are both 1 tenth below expectations.

But a major positive in the report, and one correctly signaled by regional factory reports, is a 36,000 surge in manufacturing payrolls that includes a 10,000 upward revision to July to a 26,000 increase and a 9,000 upgrade to June to a gain of 21,000. Construction payrolls are also solid, up 28,000 in August following a 3,000 decline in July. An offset to manufacturing and construction is weakness in retail which, after six straight monthly declines, added only 1,000 jobs despite Amazon’s plans to hire 50,000.

Weekly hours are also soft, down 1 tenth to 34.4 with manufacturing, in contrast to the hiring, down 2 tenths to 40.7 hours which points to a second straight monthly disappointment for the manufacturing component of the industrial production report.

But it’s the wage data that, for policy makers, may be the greatest disappointment and will provide the doves, who are concerned about the economy’s lack of inflation, serious arguments to delay the beginning of balance-sheet unwinding at this month’s FOMC. 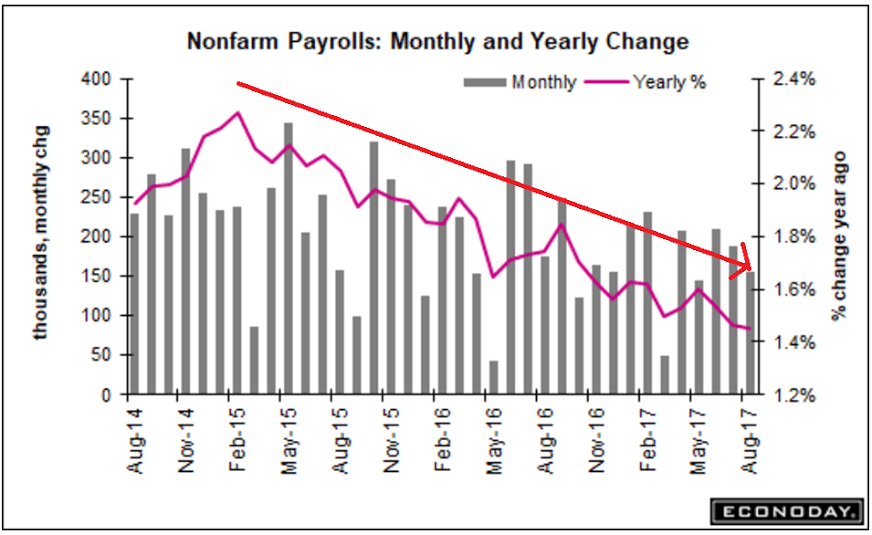 Flattening out at very low levels:

Worse than expected as year over year growth continues to decelerate:

The real weakness in the report is on the nonresidential side where private spending, reflecting weakness across all components and especially commercial building, fell 1.9 percent for a yearly decline of 3.6 percent. Public building is likewise soft with the educational category down 4.4 percent in July.

Though housing permits have been flat, the residential numbers in this report are solid. And strength for construction payrolls in this morning’s employment report might be hinting at better results for construction spending in the August report. Note that the unfolding effects from Hurricane Harvey will be difficult to gauge based on mixed results following prior hurricanes. 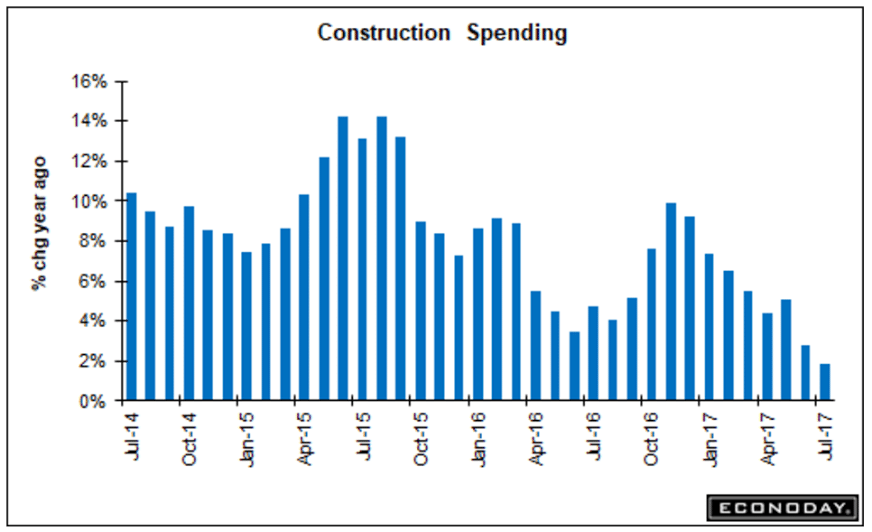 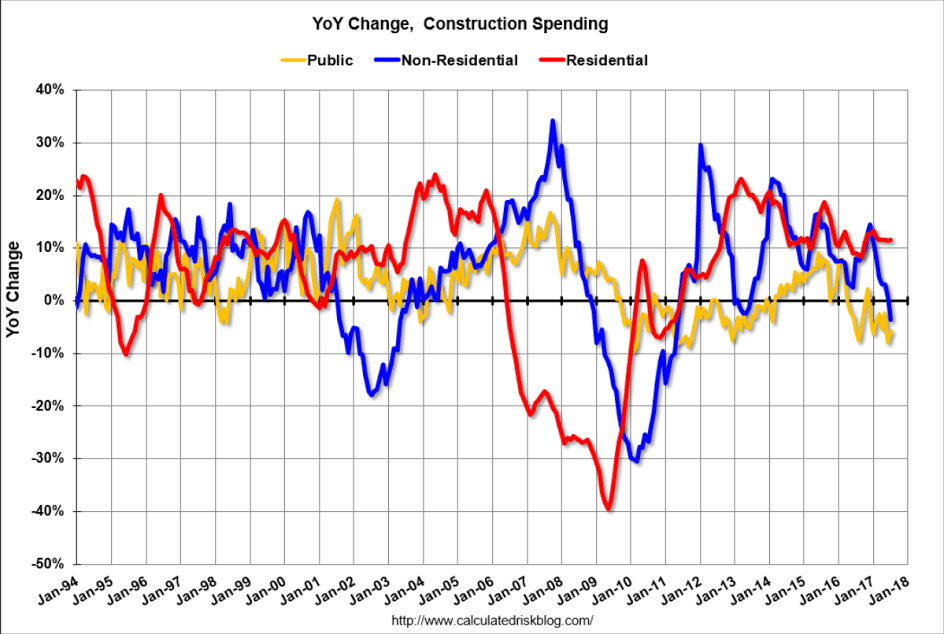 Based on an estimate from WardsAuto, light vehicle sales were at a 16.03 million SAAR in August. 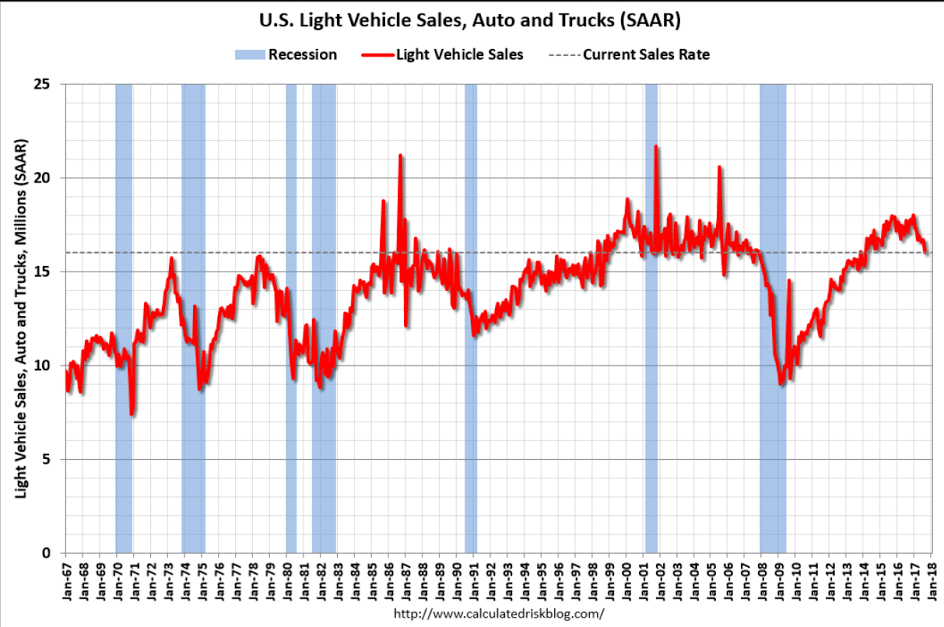 Nor does anyone seem to understand what happens if the debt ceiling is hit, and, to the contrary, there are likely hundreds in Congress who believe going ‘cold turkey’ into a balanced budget is ultimately a very good thing to let happen. Fact is, curtailments of spending cause growth to slow, and tax receipts to fall. Under normal circumstances, that just means the Federal deficit is that much higher, which acts counter cyclically to moderate the slowdown. However, after hitting the debt ceiling, falling revenues automatically induce further spending cuts, as the by law the Federal deficit can’t be allowed to increase, which induces a further slowdown in GDP and, again, tax receipts fall further, and it all goes into an out of control collapse like nothing anyone’s ever seen before:

Steve Mnuchin insists there is a tax plan (Axios) — U.S. Treasury Secretary Steve Mnuchin says that details should become publicly available by the end of September with a bill passed by year-end. Mnuchin says that President Trump is “absolutely committed to revenue neutrality” in the tax plan, but that only applies under the White House’s optimistic economic growth projections. Mnuchin reaffirmed that Sept. 29 is when the U.S. will reach the current debt ceiling, although says it could move a few days in either direction due to both Hurricane Harvey and Sept. 15 corporate tax receipts. He also reaffirmed his preference for a “clean” debt ceiling increase. 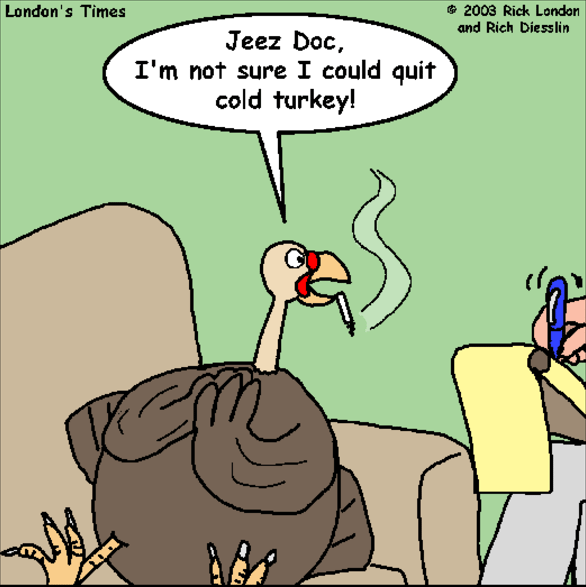