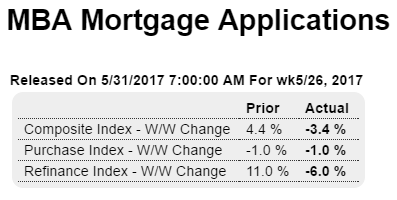 Trumped up expectations coming down:

Business growth is slowing in the Chicago area with weakness appearing in orders. The May PMI of 55.2, though down more than 3 points in the month, is still very solid but new orders slowed abruptly in the month to a 4-month low with backlog orders in contraction for a sixth straight month. Employment is flat and production is slowing. A factor that adds to the headline composite is slowing in delivery times which the report attributes in part to lack of inventories among suppliers. Input costs are also easing but remain elevated. This report, which tracks all areas of Chicago’s economy, is not showing the acceleration consistent with general expectations for a second-quarter surge. 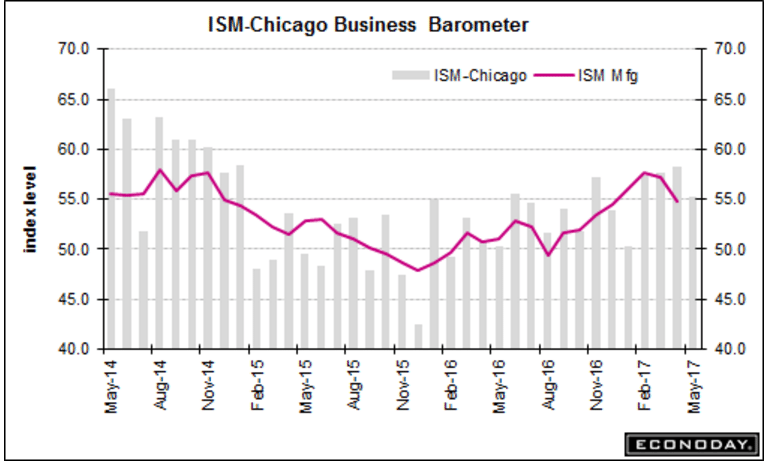 This seal it for the housing market:

Spring sales data have not been favorable for the housing sector. Pending home sales are down for a second straight month, 1.3 percent lower in April to an index of 109.8 which is 3.3 percent below this time last year. This index tracks contract signings for resales and the results point to weakness for final sales in May and June. Final resales contracted in April as did new home sales while the month’s housing starts were also weak. Spring is the big season for housing and these are not the results of a sector that will be leading the 2017 economy.

U.S. auto sales seen up 0.5 percent in May: JD Power and LMC

May 25 (Reuters) — The seasonally adjusted annual rate for the month will be 16.9 million vehicles, down from 17.3 million last year.

U.S. sales of new cars and trucks hit a record high of 17.55 million units in 2016. But as the market has begun to saturate, automakers have been hiking incentives to entice consumers to buy.

“While consumers will see substantial discounts this Memorial Day weekend, they are not expected to overcome the slowing demand in auto sales,” said Deirdre Borrego, senior vice president of automotive data and analytics at J.D. Power.

The consultancies said consumer discounts averaged $3,583 per unit, a record for the month, surpassing the previous high for the month of $3,342, set in May last year.

The average number of days a new vehicle sits on a dealer’s lot before being sold hit 71 in the first 14 days of May, the highest level for any month since July 2009.