Last month revised lower and low and below expectations this month. Again, in line with decelerating credit data which means persistent weakness in GDP:

Based on the consumer and based on inflation, FOMC members won’t be feeling much pressure to raise rates at least not any time soon. Consumer spending was unchanged in March, even weaker than Econoday’s 0.1 percent consensus. More startling is the weakest showing in 16-1/2 years for core PCE prices which fell 0.1 percent to take down the year-on-year rate by a sizable 2 tenths to 1.6 percent.

Income is also disappointing, up only 0.2 percent with the wages & salaries component posting a very weak 0.1 percent rise. Consumers nevertheless managed to move money into the bank as the savings rate rose 2 tenths to 5.9 percent (which is another factor behind the weak spending).

The core PCE index is the key inflation gauge for the FOMC and prior to this report members were expressing confidence that it was stable and generally headed toward their 2 percent target. And overall prices which moved above target in February are now back below target, falling a monthly 0.2 percent with the year-on-year rate down a steep 3 tenths to 1.8 percent. First-quarter economic data proved surprisingly weak even by first-quarter standards. The economy has catching up to do.

Last month revised higher but followed by a much lower than expected number this month as the annual rate of change continues to work its way lower. And note the drop in non residential spending, where a strong gain was posted in the Q1 GDP estimate:

Data on construction spending are subject to unusual volatility, evident in today’s report which came in far below expectations, at minus 0.2 percent vs Econoday’s consensus for a 0.5 percent gain. These results for March, however, are offset by a 1.0 percentage point upward revision to February which now stands at a very strong 1.8 percent.

March’s weakness is tied to a sharp 1.3 percent decline in the private nonresidential component, where spending was especially weak for commercial units as well as office units. Public spending was also weak with educational building down for a 2nd straight month. The positives in the report are in housing with multi-family units extending their strong run with a 2.0 percent monthly gain, supported by a gain for single-family units and another strong month for home improvements.

It’s hard to get a gauge on this report because of its revisions and volatility, and the general weakness in nonresidential construction contrasts with the enormous strength of investment in nonresidential structures in Friday’s first-quarter GDP report. The housing side is more clear with gains backed up by strength in underlying permits and strong demand for new housing. Next up on the construction sector will be Friday’s employment report and construction payrolls which have been mostly solid so far this year. 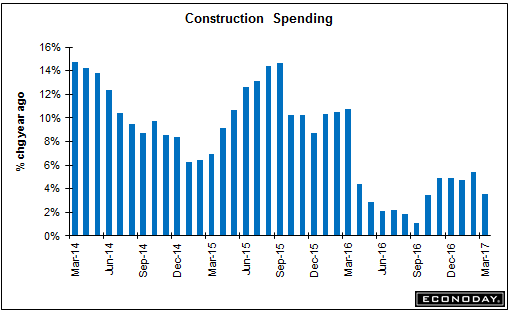 ISM manufacturer’s trumped up expectations continue to revert, as does the Markit manufacturing PMI: