Weak, a bit below expectations, and not much hope left for Q2 either.

Highlights
Consumer spending, largely on services, helped hold up first-quarter real GDP which came in at an annualized plus 0.5 percent rate and just below the Econoday consensus for 0.7 percent. Consumer spending (personal consumption expenditures) rose at a 1.9 percent rate, down only 5 tenths from the fourth quarter. Within this, spending on services rose an in-trend 2.7 percent to offset a 1.6 percent decline in durable goods which were hit by weak vehicle sales.

Residential investment, up 14.8 percent, is a highlight of the report and helped offset a sharp 5.9 percent decline in nonresidential investment where weak energy drilling is taking a big toll. Inventories rose in the quarter but at a slower rate which is a negative for GDP while exports, reflecting weak global demand, were a negative for a second quarter in a row. Government purchases were a small plus in the quarter.

Price data are mixed with the price index up only 0.7 percent in the quarter, down 2 tenths from the fourth quarter. But the core deflator is up, 7 tenths higher to plus 1.9 percent which should get some attention.

The consumer bailed out the first quarter, both on services and also on fixing on their homes. But otherwise the report points to nearly no momentum going into the Spring quarter.

The US economy expanded an annualized 0.5% percent on quarter in Q1, according to the advanced estimate released by the Bureau of Economic Analysis. It is the weakest performance since Q1 2014 as consumer spending slowed, the drag from trade and business inventories worsened and business investment fell for the third straight quarter.

As previously discussed, health care premium count as personal consumption expenditures and GDP, so last year they spiked due to new people being covered by Obamacare, thereby supporting GDP by that much. But that was a one time event and so now consumption, so measured, is softening to where it probably has been all along: 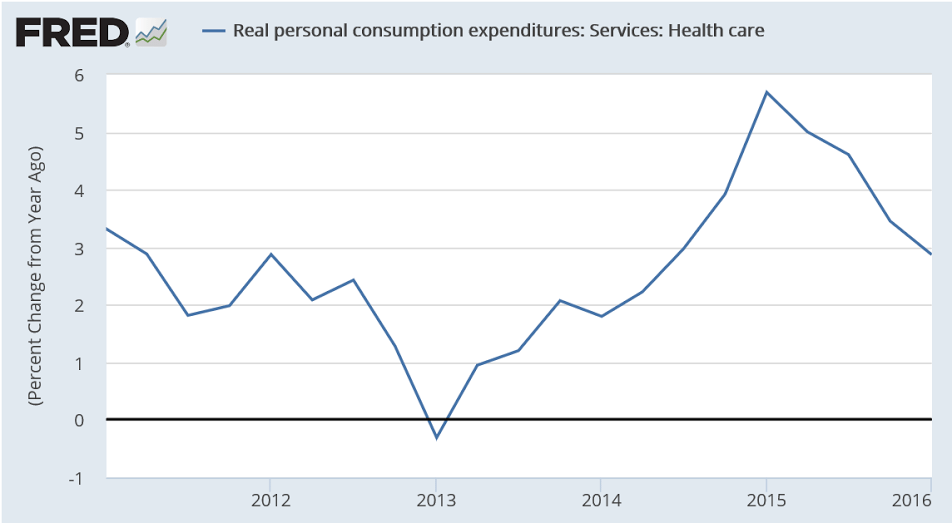 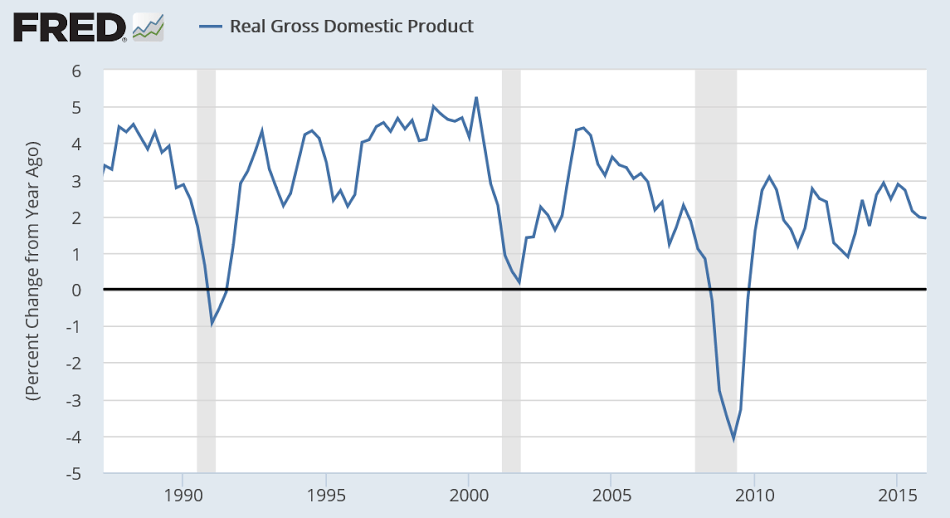 Highlights
Oil prices may be higher but steady contraction is the long uninterrupted theme of the Kansas City Fed manufacturing sector where the composite index came in at minus 4 for April. Contraction in new orders is only marginal, at minus 2 for a second straight month, but contraction for backlog orders, at minus 18, remains severe. Employment is also in deep contraction, at minus 12. Output indicators are also weak, at minus 8 for production and minus 9 for the workweek. Selling prices remain in contraction, at minus 6, but raw material prices, at 4, are back in the plus column and reflect the turn around for oil prices. But higher oil prices have yet to give this report much boost where weakness in energy equipment has been a long fixture. Weakness in export orders, at minus 4, has been another fixture.