Remember the hype when spending came out at up .5 last month- hard evidence the economy was heading north? Well, it just got revised away to a recession like .1, and PCE down to only a 1% year over year increase, and no one is saying anything, with the core CPE gain down to .1 vs last month’s .3 which was deemed evidence of a return to inflation. Not mention the .1 drop in wages and salaries after all the hype about the return of ‘wage inflation’:

Highlights
The outlook for the consumer has buckled, at least a bit following a surprisingly weak personal income and spending report for February. Income rose a soft 0.2 percent with wages & salaries slipping 0.1 percent. But the worst news comes from the spending part of the report, up only 0.1 percent and with January revised sharply lower, now also at 0.1 percent vs an initial jump of 0.5 percent.

Turning back to income, the fall in wages & salaries is the first since September last year but was offset in part by a rise in disposable income that reflected gains for both income transfers and rental income. And consumers continued to put money in the back as the savings rate, in perhaps a sign of consumer defensiveness, rose 1 tenth to 5.4 percent for a 3-year high.

GDP estimates for the first quarter will not be going up following this report and estimates for the second quarter and beyond may be coming down. The lack of wage gains, together perhaps with softness in home appreciation, may be holding back the consumer more than thought. This report points squarely at weakness, weakness for what is the core itself of the U.S. economy.

Up a bit from very depressed levels, but problematic details remain:

Highlights
Weakness eased in the Dallas Fed’s manufacturing sector this month, in what is the latest positive signal for March. The general activity index jumped 18 points though is still deeply in the negative column, at minus 13.6 for the 15th straight month of contraction. But positives are expansion in production, at plus 3.3 to end two prior months of contraction, and also a gain for capacity utilization, also at plus 3.3. But order readings are in contraction though less so than prior months. Readings on employment, however, showed no improvement and remain in the negative column. Input prices show no change with selling prices still contracting. Wage pressures, however, remain firm. One special positive in the report is a gain for the outlook, at 6.1 for the first positive reading in four months. The Empire State, Philly Fed, and Richmond Fed reports are all showing strength this month, joined now by the hard-hit Dallas Fed, indications that point to a bounce-back from what was a very soft month of February for the factory sector.

Looks to me like a bit of volatility- a move down followed by a move back up- while the actual level remains far below prior cycles:

Highlights
A surge in the Midwest fed a very promising and stronger-than-expected 3.5 percent rise in pending home sales for February. Pending sales in the Midwest rose 11.4 percent with monthly sales also up in the South and West. The jump in the Midwest mirrors a February jump in the West on the new home side, in what are perhaps initial signs of isolated life in what has been a dormant housing sector of late. Today’s report points to a badly needed bounce ahead for final sales of existing homes which, in previously released data for February, plunged 7.1 percent. 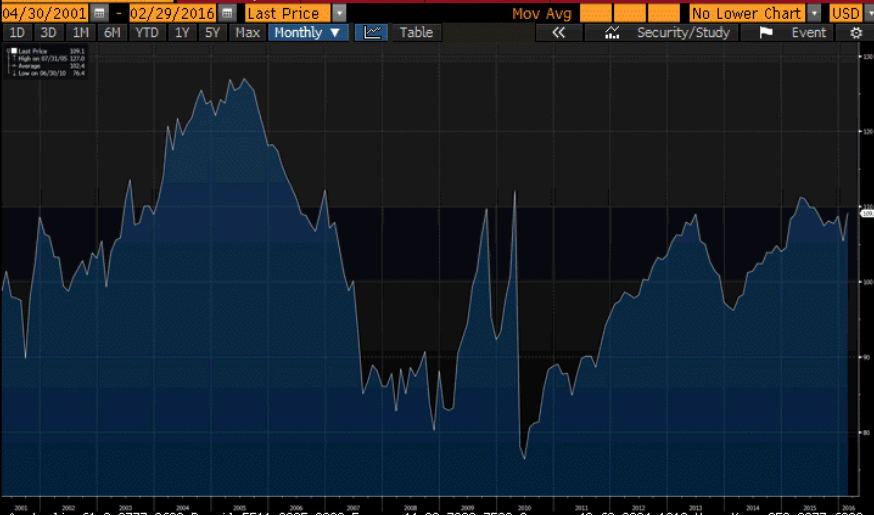 Down again, with more to come from accelerating liquidation of excess inventories, as ongoing oil capex cuts and related spending cuts continue as well:

Feb 25 (Reuters) — Barack Obama has called himself the “champion in chief” of immigration law reform. Latino activists, angry at his administration’s removal of illegal immigrants, have responded by calling him the deporter in chief. What do the data tell us?

“America is expelling illegal immigrants at nine times the rate of 20 years ago; nearly 2m so far under Barack Obama, easily outpacing any previous president,” the Economist wrote in February 2014. “Border patrol agents no longer just patrol the border; they scour the country for illegals to eject. The deportation machine costs more than all other areas of federal criminal law-enforcement combined.”