Looks like the lower oil prices have not increased US demand:

Second, the deflationary influence of lower energy prices is still working its way through the economy.

Third, the chart looks to me like it’s still working it’s way lower

Fourth, core CPI is useful as a forecasting tool but the Fed’s mandate is headline inflation: 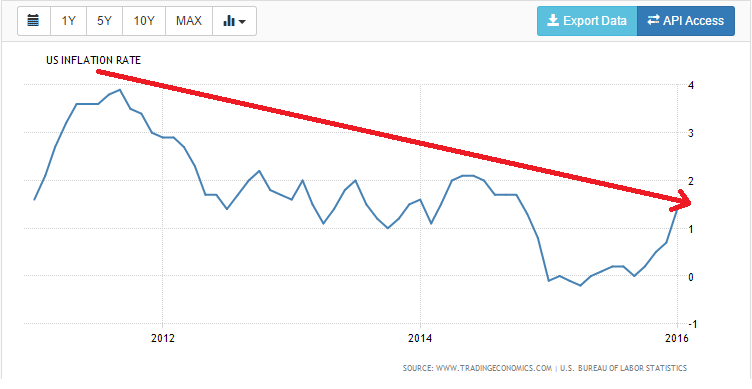 Highlights
Consumer prices are on the rise and the Fed’s December rate hike doesn’t look misplaced at all. Core price jumped 0.3 percent in January which beats Econoday’s top-end estimate with the year-on-year rate up 1 tenth to plus 2.2 percent. The Bureau of Labor Statistics notes a “lack of declines” across core readings. When including energy, however, and also food, total prices were unchanged in the month though the year-on-year rate literally surged, up 7 tenths to plus 1.4 percent.

Goods prices are mixed with apparel jumping 0.6 percent in the month but with energy down 2.8 percent and gasoline down 4.8 percent. Food prices were unchanged. The only core reading showing any contraction was home furnishings and only at minus 0.1 percent. New vehicles rose 0.3 percent with used vehicles up 0.1 percent. Airfares were especially hot, up 1.2 percent in the month.

These results may prove to be a game changer for the FOMC, pointing to pressure for next week’s PCE price data and perhaps reviving chances for a March FOMC rate hike. 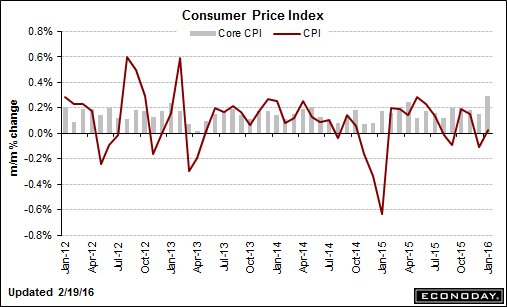