Highlights
In a confirmation of strong levels of job openings in the JOLTS report, small businesses are reporting the most difficulty in finding qualified workers since 2007, pointing to the risk ahead of wage pressures. Boosted by employment, the small business optimism index inched 2 tenths higher in September to a slightly higher-than-expected 96.1. Plans to increase employment are also up, at their best level of the year, while capital outlay plans are also positive. Earnings trends are in the negative column as are expected credit conditions. Overall, this report is moderate though the strength in employment could raise talk of strength for the October employment report. 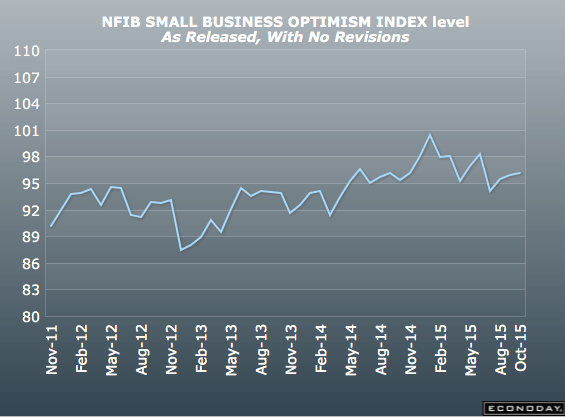 Highlights
ZEW’s October survey was surprisingly weak with analysts’ assessment of both current and expected economic performance comfortably short of the market consensus.

Current conditions fell 12.3 points to 55.2, their sharpest decline since October 2014 and their lowest reading since March. Expectations were off an only slightly smaller 10.2 points at 1.9, their seventh consecutive decrease and their worst outturn in a year.

The findings provide one of the first real looks at how the impact of the VW emissions scandal has hit confidence and if anything, there may even be some relief that the report is not weaker still. Nonetheless, with worries about the slowdown in business activity in the emerging markets also a major feature, it was significant that ZEW felt obliged to talk down the likelihood of Germany sliding back into recession. Not so long ago the domestic economy was supposed to be leading the rest of the Eurozone on the path to solid economic recovery.

The correlation between the ZEW and PMI surveys is not especially high on a monthly basis but there is probably some extra downside risk to the latter in the wake of today’s news.