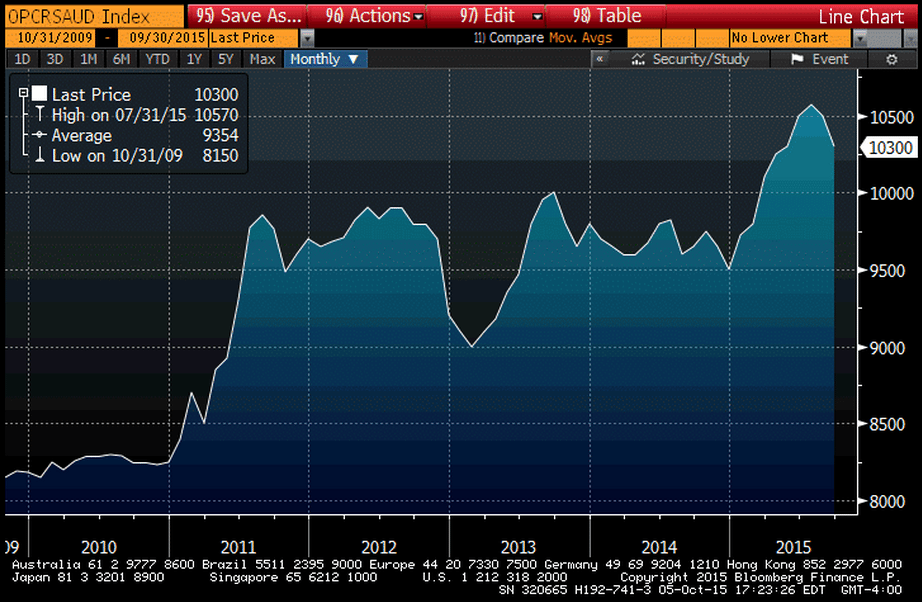 Gap widening as previously suspected, even with lower oil prices:

Highlights
A surge in imports of new iPhones helped feed what was an unusually wide trade gap in August of $48.3 billion, well up from July’s revised $41.8 billion. But cell phones, at $2.1 billion, make up only a portion of the gap with a drop in exports the most salient factor. Exports were down nearly across the board including industrial supplies at minus $2.2 billion, consumer goods at minus $0.6 million, autos at minus $0.5 million, and foods/feeds/beverages at minus $0.3 million. Weakness in exports reflects weakness in foreign demand together with the strength of the dollar.

The goods gap came in at $67.9 billion, which is up from last week’s advance reading of $67.2 billion. The petroleum gap, which is always a central factor in the nation’s deficit, fell to $6.9 billion from July’s $8.1 billion and reflects lower prices. Demand for the nation’s services, unlike its goods, continues to climb, to a surplus of $19.6 billion vs $19.5 billion in a reflection of demand for technical and managerial services.

Imports are a subtraction on the national accounts but are, nevertheless, a two-way street, that is reflecting demand at home which is a sign of economic strength, not weakness. Still these results will limit expectations for third-quarter GDP. 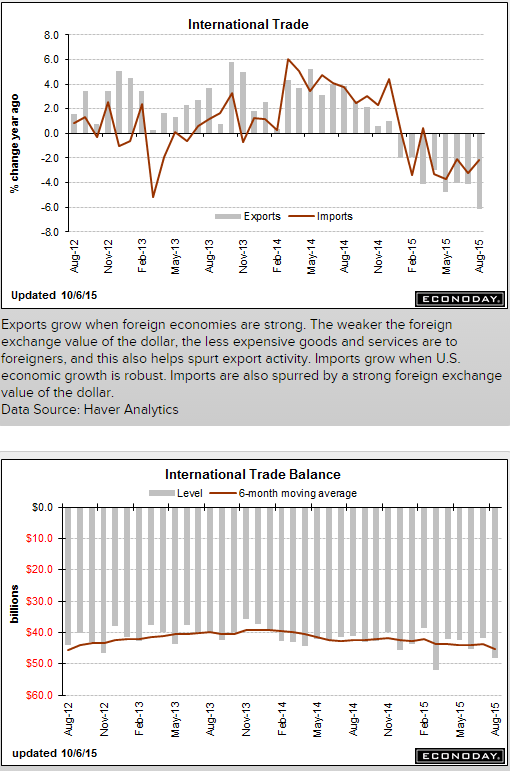 Highlights
Unlike other confidence readings that are climbing, Gallup’s reading is holding at lows, at minus 14 in September vs August’s minus 13. The report cites losses in the stock market and disappointing jobs data as negatives, offset by low prices at the gas pump. For current conditions, 24 percent of the sample rates the economy as excellent or good vs 31 percent rating it as poor. For expectations, 38 percent say the economy is getting better vs 58 percent who say it’s getting worse.

Just when you think it can’t get any worse:

Highlights
Retail sales are looking very soft based at least on Redbook’s sample which has been reporting, mostly in contrast to solid government data, soft results since way back in March. Same-store sales are up only 0.7 percent for the October 3 week which is the weakest Redbook reading of the year. The report doesn’t offer any meaningful commentary on the weakness but does say seasonally cooler weather is now helping sales at specialty and department stores. 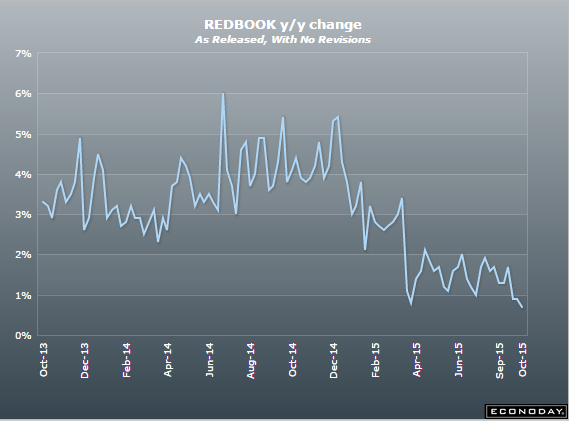 Germany under pressure as well:

Highlights
Manufacturing orders were weaker than expected in August. A 1.8 percent monthly fall followed a steeper revised 2.2 percent drop in July and constituted the first back-to-back decline since January/February. However, with orders down a particularly hefty 5.3 percent a year ago, annual growth still rebounded sharply to stand at 2.2 percent.

The monthly decrease was led by capital goods which were down fully 2.8 percent. However, weakness was broad-based as consumer and durable goods dropped 1.5 percent and basics were off 0.4 percent.

Regionally domestic orders contracted 2.6 percent after a 3.7 percent bounce at the start of the quarter and, ominously, have now declined in four of the last five months. Overseas demand fell 1.2 percent, compounding July’s 6.1 percent slump and would have looked a lot worse but for the surprising robustness of the Eurozone component which posted a 2.5 percent gain following a 0.6 percent increase last time. Orders from the rest of the world fell 3.7 percent having already nosedived 10.1 percent in July.

August’s setback means that average total orders in July/August were 2 percent below their mean level in the second quarter. The new manufacturing PMI pointed to solid growth of both output and orders in September but readings here have proved overly strong in recent months. Although early days yet, there are good reasons for supposing that the economic recovery has lost some momentum and hopes for a rebound this quarter are looking somewhat optimistic.