Mortgage purchase apps were up 10% for the week, leaving them about 15% higher than last year, which is where they’ve been for a while. However, cash sales are down sharply, so it seems that buyers have shifted from all cash to borrowing, leaving the total purchases about the same:

June 10 (CNBC) — Interest rates’ sharp jump to their highest level this year caused a sudden surge in mortgage applications. While that may seem counter-intuitive, there’s a reason: Fear that rates will move even higher.

Total mortgage application volume jumped 8.4 percent on a seasonally adjusted basis for the week ending June 5th from the previous week, according to the Mortgage Bankers Association (MBA). The previous week included an adjustment for the Memorial Day holiday.

Refinance volume increased 7 percent week-to-week, and applications to purchase a home jumped 10 percent, both seasonally adjusted. Purchase volume is now 15 percent higher than the same week one year ago, but refinance volume is off nearly 5 percent. The weekly move higher in refinances was likely due to the holiday skewing the trend. Refinances are still lower than they were two weeks ago. This all comes as rates continue to climb.

The average contract interest rate for 30-year fixed-rate mortgages with conforming loan balances ($417,000 or less) increased to 4.17 percent, its highest level since November 2014, from 4.02 percent, with points increasing to 0.38 from 0.33 (including the origination fee) for 80 percent loan-to-value ratio loans, according to the MBA

While higher rates make home buying more expensive, sharp moves higher often have the immediate effect of getting potential buyers off the fence, before chilling the overall market in the longer term. That is especially true now, as the Federal Reserve is widely expected to increase interest rates in addition to what is happening in the U.S. bond market already. 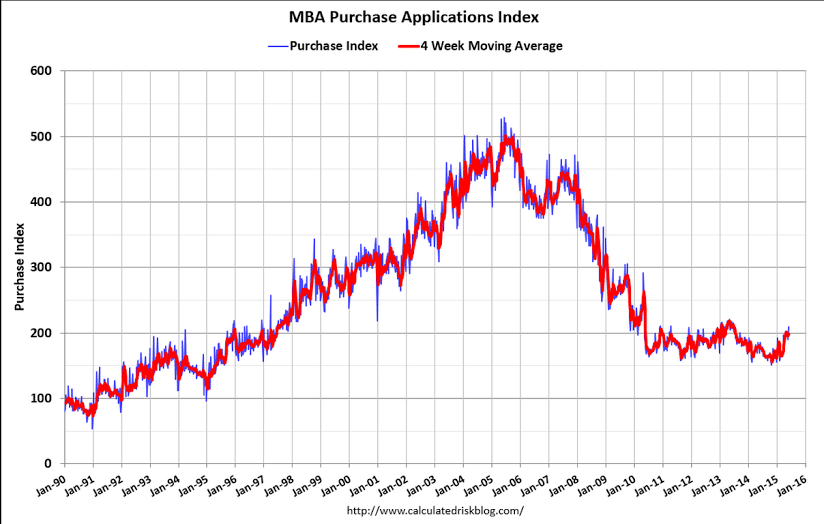 Confirms that their western educated economists’ believe ‘monetary policy’/rate cuts etc. work to increase output and employment, even though I think they are entirely wrong and backwards:

China’s economy to pick up in H2: Central bank economists

June 10 (CNBC) — Economists at China’s central bank have sharply lowered their 2015 inflation forecast even as they predicted that stabilising Chinese home prices and firmer foreign demand will drive a pick-up in the world’s second-biggest economy in the next six months.

In a report posted on the central bank’s website on Tuesday, economists at the People’s Bank of China (PBOC) said they had cut their 2015 inflation forecast for China to 1.4 percent, from an initial 2.2 percent.

The report, which said the estimates represented the view of the analysts and not that of the PBOC, contained other downward revisions to forecasts that underscored headwinds being faced by the slowing Chinese economy.

Yet, the economists were cautiously optimistic on the outlook.

The property market is “starting to stabilise” and the world economy should show further signs of a recovery in coming months, said the economists who were led by Ma Jun, the chief economist at the central bank.

Looser monetary policy conditions as a result of China cutting interest rates thrice since November were also expected to help shore up growth in coming months, the economists said.

“We estimate that our country’s gross domestic product growth in the second-half of the year will be higher than in the first-half,” they said, noting that it takes six to nine months for China’s economy to feel the effects of monetary policy easing.

The report showed the economists had shaved their forecast for China’s economic growth to 7.0 percent for 2015, from 7.1 percent previously.

The forecast for producer prices was also sharply revised to indicate deepening deflationary pressure. The producer price index is now expected to fall 4.2 percent for 2015, from an estimated decline of 0.4 percent previously.