This is not a sudden catastrophic event, but a permanent reduction in about that much demand over time. Initially consumers may borrow a bit more to sustain consumption, make their payments, etc. but that much less income and savings than otherwise does take it’s toll on sales, output, and employment.

The attached chart is only meant to show how we weren’t doing all that great to begin with, and how dips below current levels tend to deteriorate into something worse when the budget deficit becomes too small to support the credit structure and private sector pro cyclical forces come to ‘bear’.

And while still relatively large by historical standards, the federal deficit is no longer nearly as large as it has been, and is rapidly declining, helped of course by the pro active tax hikes and spending cuts, which means we are that much more dependent on private sector credit expansion to sustain growth and employment.

To that point, it’s said that ‘housing is kicking in’ etc. which is true. But note that it’s the private sector credit expansion aspect of housing ‘replacing’ the decline in govt deficit spending that supports additional growth. That is, it’s not a shift from income spent on one thing shifting to housing, but the additional spending from the ‘borrowing to spend’ aspect of housing that does the trick. And this time around I suspect there won’t be a housing credit expansion like the one that turned out to be sub prime fraud, or the one in the 80’s that turned out to be the savings and loan fraud, etc. And without that kind of ‘bubble’ of some sort we never have had a robust economy that I can recall. 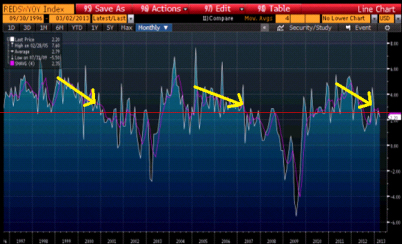