Paul White complemented Javier Morcillo’s dominant opening stint to take a convincing win in the Azteca/Strata 21 Mosler in the two-hour race on Saturday afternoon. Andy Schulz pulled every trick he knew to get the Ferrari 430 started by Paul Bailey into contention with the Mosler and finished 38 seconds down, two laps ahead of the Lee Mowle/George Murrells Ginetta G55.

No surprises here – It was the championship’s “big four” at the front, with Javier Morcillo posting 45.816 around half-way through the 45 laps that the Mosler managed during the 50–minute session, which indicated that there wasn’t much sitting around for the Spaniard and co-driver Paul White. Andy Schulz and Paul Bailey did 48 laps, but ended nearly half a second shy of pole in the SB-Race Engineering-run Ferrari 430, a little more than a tenth ahead the Optimum pairing of Mowle and Murrells, who did the same amount of lappery in the G55. Having to be content with fourth place after half of the distance, though, were Mike Millard and Ian Heward, the Flat Six Rapier SR2 being sidelined with alternator failure, though the team were hoping that a complete rebuild of the Nissan engine, which revealed an incorrectly machined cylinder head, might enhance their reliability.

The Team Tiger Mantis headed the Class 2 runners, Chris Beighton reporting that all was now well with the 13-year old machine that hadn’t been raced for several seasons, with the Motionsport Ferrari 458 of Simon Philips and Peter Storey three-quarters of a second adrift. But splitting them on the grid were the two fastest of the Class 3 contingent, the Bullrun Lotus Evora and the returning Orbital Sound Lotus Elise of Chris Headlam and Jamie Stanley, which had missed the opening three rounds. “We’ve changed just about everything on the car and you’ll see the improvement when we go out for qualifying” revealed Jamie Stanley earlier in the day, a point that wasn’t missed by Bullrun’s Richard Adams; “Class 3 is getting very strong and competitive now” he rued after qualifying, adding “The Webb’s BMW and then the Chevron and now we’ve got the Abra/Poole BMW, plus the Elise is in too – it’s going to be tougher now”. 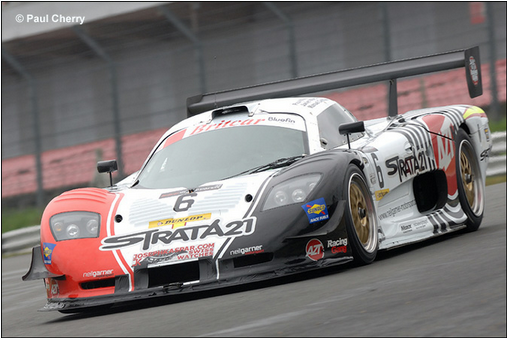